A somewhat subdued period birdingwise at the moment. With work going on at home and the weather, time spent 'in the field' has been limited. Visits to Brandon Marsh, Coombe Abbey, Coton and Kingsbury Water Park and Middleton Lakes plus a couple of local walks have all been quite brief, but produced a few highlights. Good to see a big flock of Golden plovers estimated 700 on the Jubilee wetlands and the Stonechats were up to 7 birds: 6 in Staffs. and just the 1 in Warks. The numbers of Siskin at Brandon Marsh were building up nicely and a few Goosander are appearing here and there. The Tawny Owl at Coombe Abbey showed well but may well have to relocate with some of the mature trees it favoured being felled at the moment. No doubt to be replaced by some none indigenous species with little value to our native wildlife. 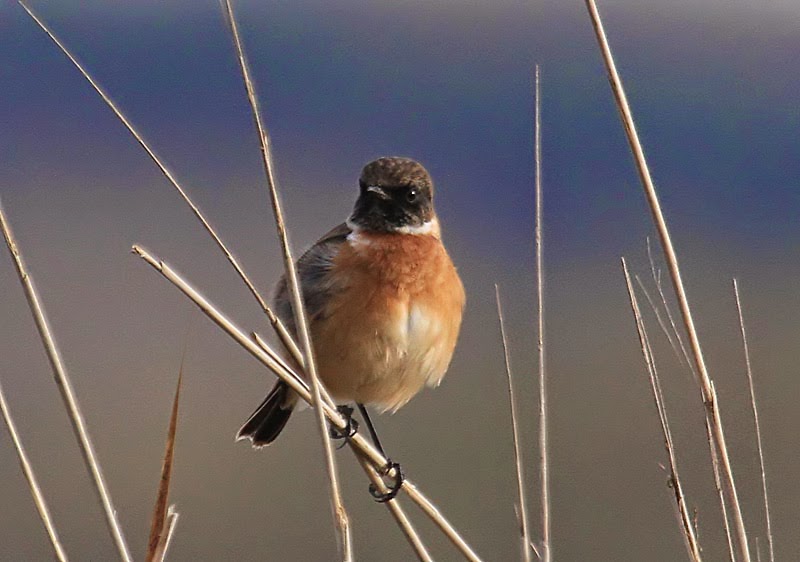 Stonechat - much photographed but at least its not on a post. 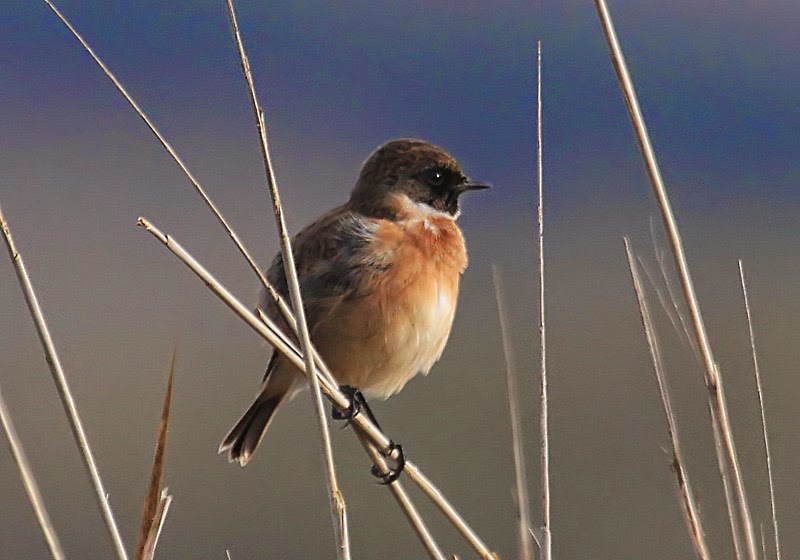 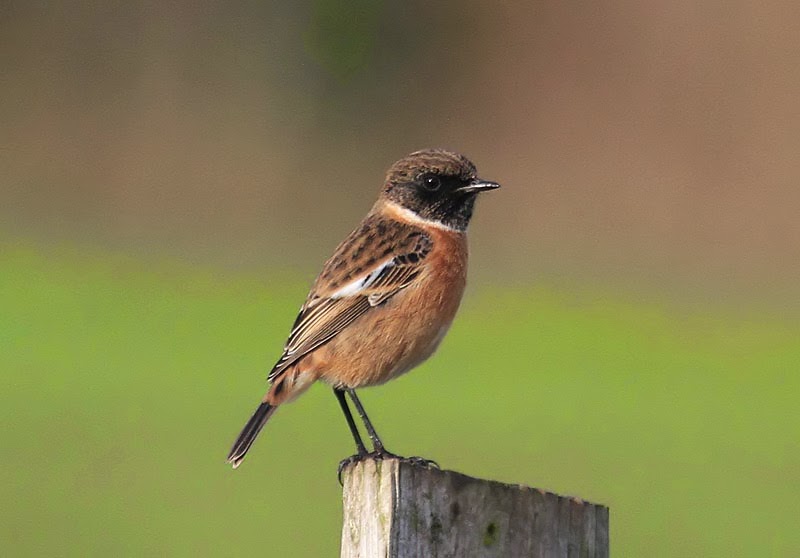 Stonechat, Ah, they do seem to like posts don't they. 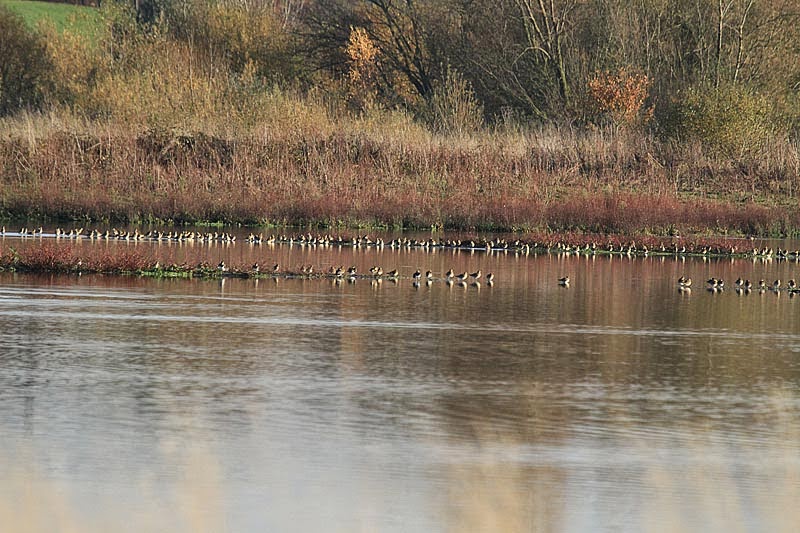 Golden plover, part of the flock
Posted by bob duckhouse at 08:01 1 comment:

Draycote Water - Cause for concern ?

Tuesday 18th November 2014
Popped into Draycote Water today on the off chance. Beautiful morning so can't complain but not too many birds about. And sadly a good many of those that were, were on their last legs or already dead. Lesser black backed, Herring and Blacked headed gulls were suffering in numbers I'd never seen before. Gulls do pick up diseases and/or poisons from the tips they feed on. Bob Hazel who had been round the reservoir reported dead gulls everywhere and the wardens we spoke to had collected a large number of corpses already. A sad sight indeed. 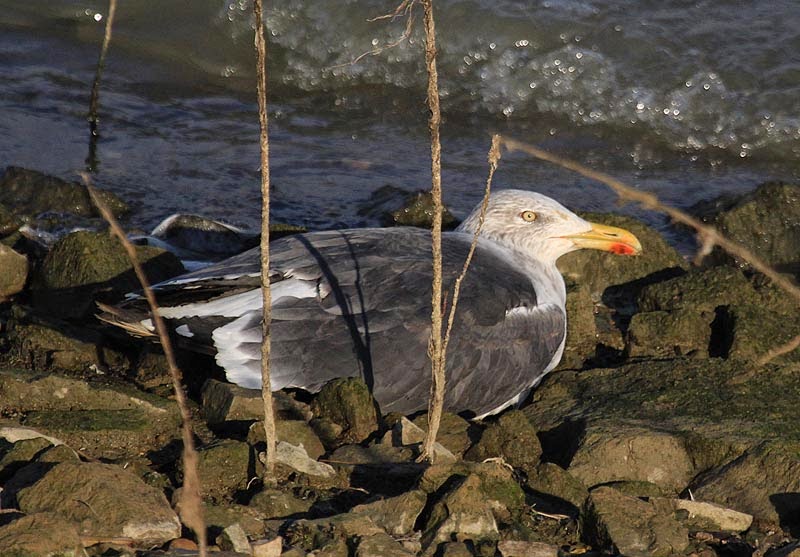 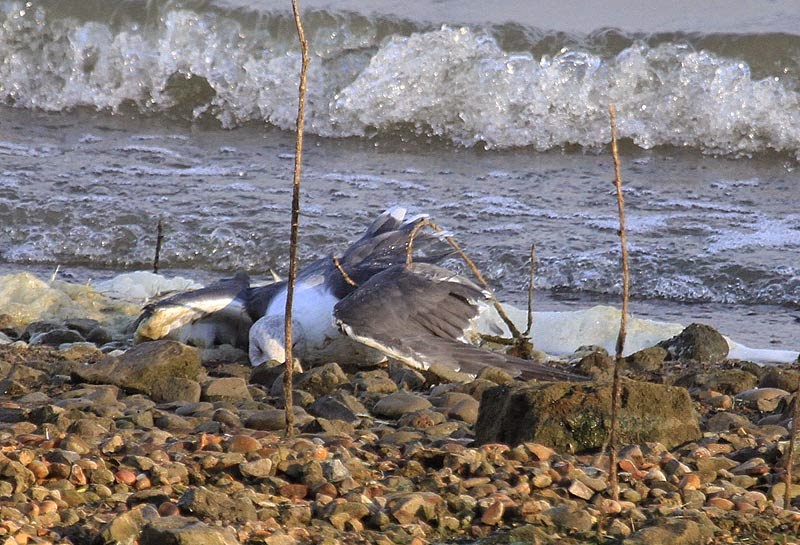 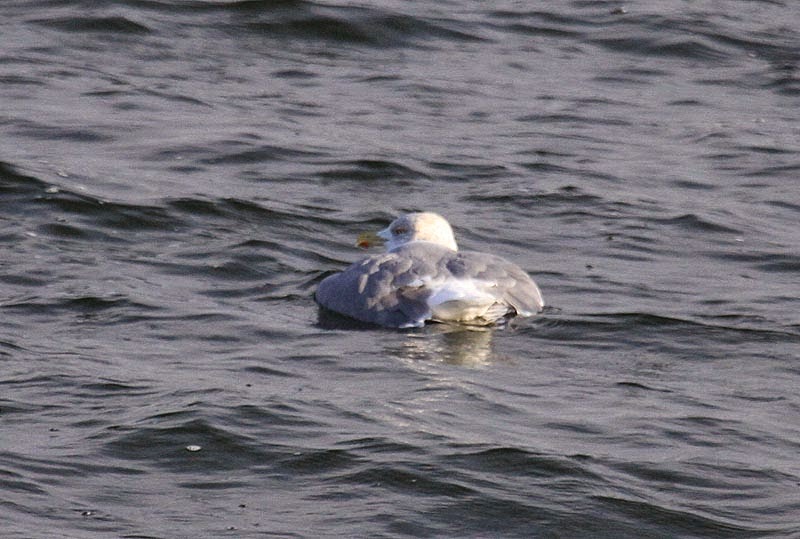 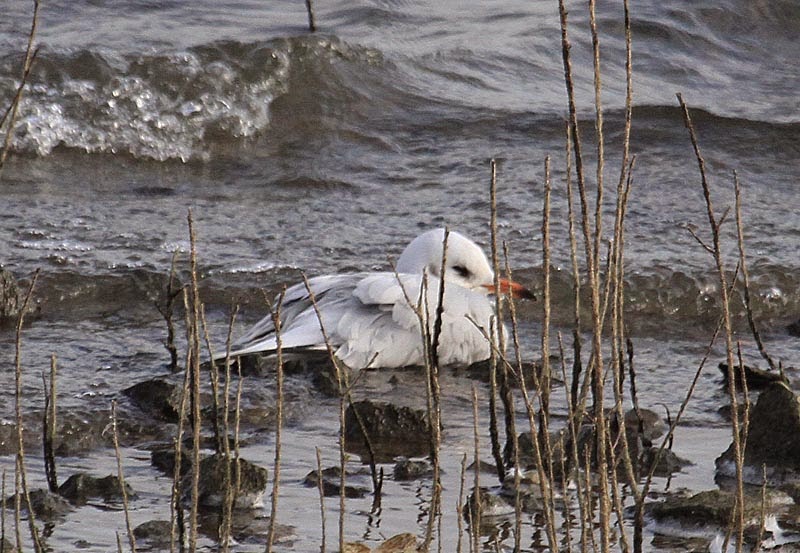 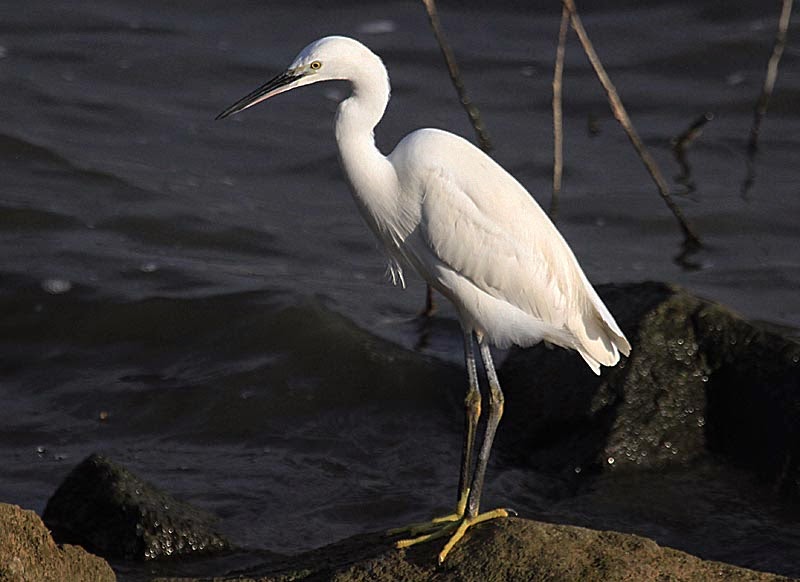 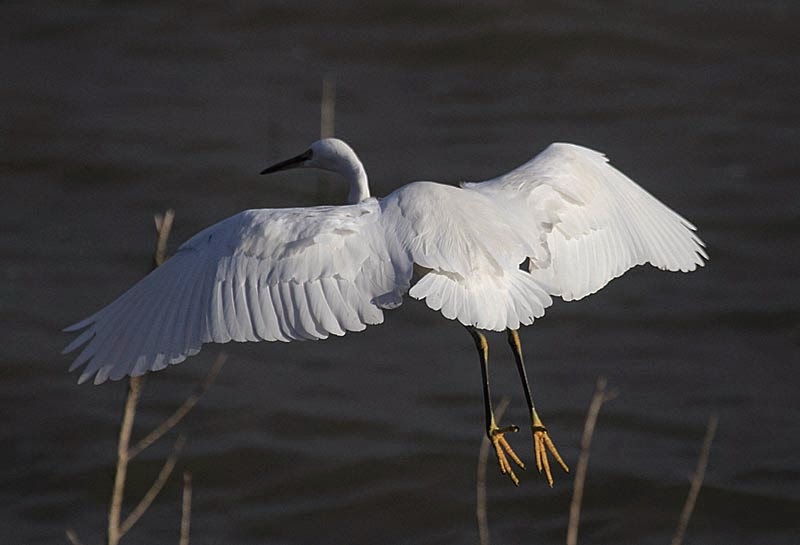 Little Egret
Posted by bob duckhouse at 11:17 No comments:

Monday 10th November 2014
Spent an amazing late afternoon in the Tame valley. I started at Kingsbury Water park. There was a male Stonechat at Cliff pool and assorted Ducks. I carried on up the canal to the field with the Konig horses where a Water Rail was calling. A Kingfisher flushed from the swollen river at Fishers Mill but it was just before Fisher's Mill that the fun began. First a Merlin flashed over the Dosthill bund and then as I approached the first screen I saw a Marsh Harrier quartering the islands in the centre of the Jubilee wetlands. The Marsh harrier, a female, was being mobbed persistently by two crows and eventually went to ground on an island. There was no further sight by the time I left as dusk approached so it may well have roosted. Just before I left though there was further 'excitment' when a flock of 300 Lapwings accompanied by a single Golden plover were flushed by a Peregrine. Quite an eventful afternoon!
Posted by bob duckhouse at 09:56 No comments:

Not much time for Birding today but got an hour's 'vis migging' in at Grendon Common. Brilliant work by Keith Warmington and his team in clearing Silver Birch saplings in an attempt to restore original heathland. Certainly improved the vis. but will undoubtedly improve the habitat for Butterflies and reptiles.
Anyway, waited nearly half an hour before the first group of Redwing flew over, about 30. It was shortly afterwards though that the star bird, a single Woodlark flew over, calling continuously. 5 Skylarks also flew over later to give a good chance to compare the two species.
Other birds of interest; Raven, Gt spotted Woodpecker (2), Common Buzzard (2).
Posted by bob duckhouse at 09:30 No comments:

5th November 2014
At Alvecote pools there were small flocks of Redwing in the bushes and a small flock of Fieldfare (6) flying over. At Coton there was a flock of Lapwing and small flocks of Lesser Redpolls and Bullfinches. At Shustoke reservoir the Shag was still present as was the small flock of Red crested Pochard now down to 4. Also at Shustoke were a pair of Raven and a Common Sandpiper. 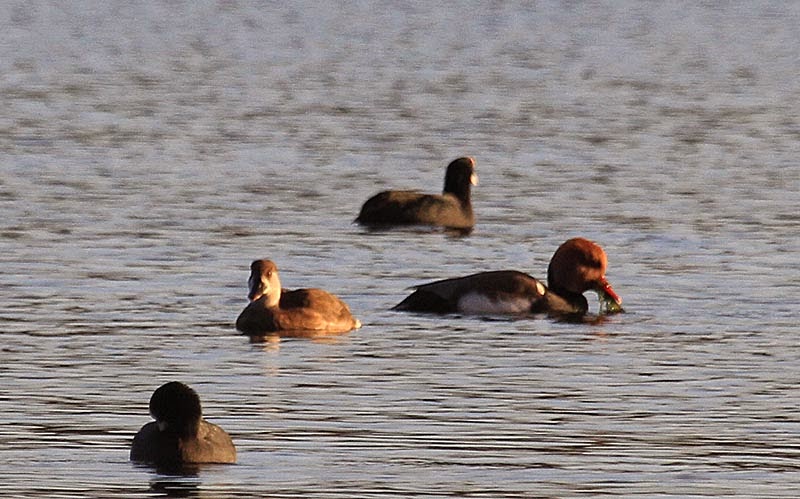 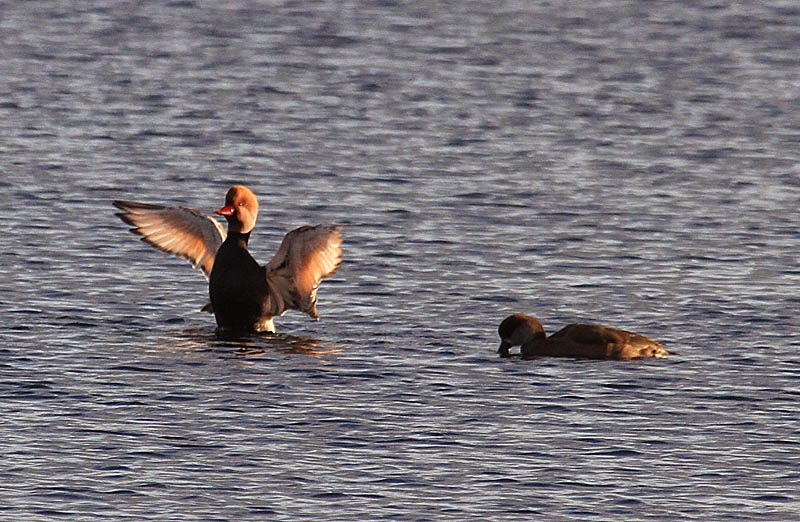 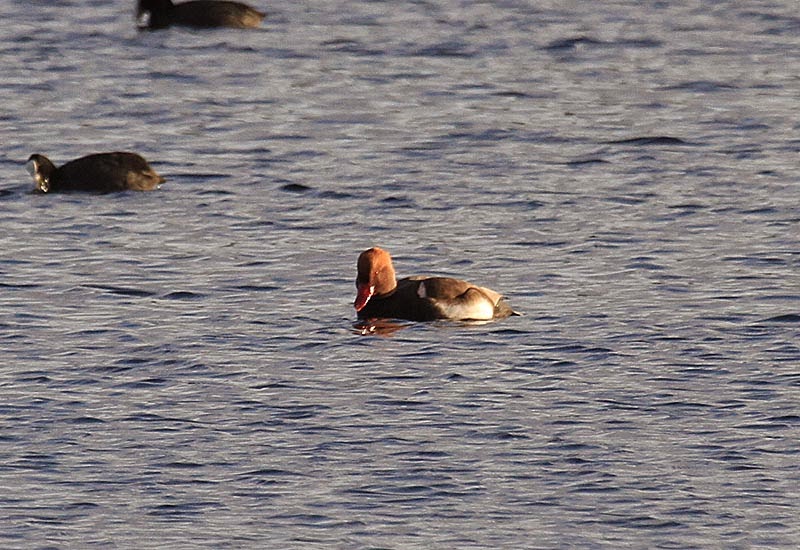 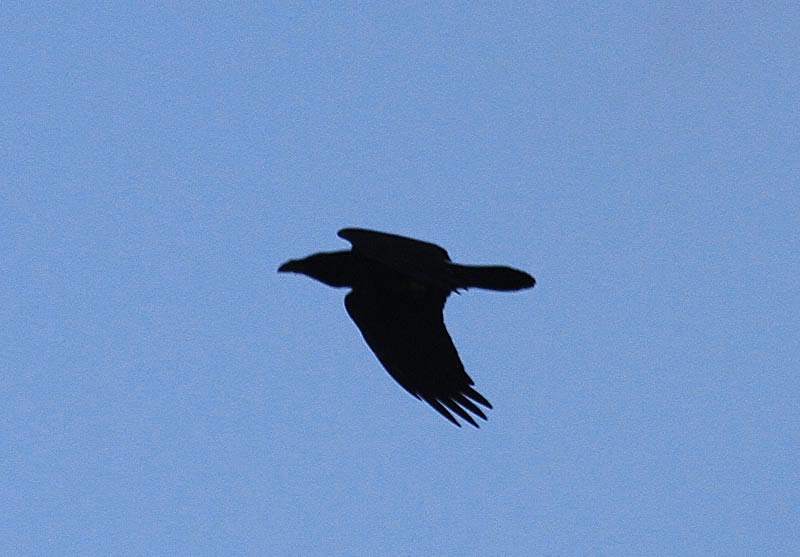 One of the 2 Ravens
Posted by bob duckhouse at 13:55 No comments:

Tuesday 4th November 2014
Popped in to Shustoke Reservoir this morning. Almost all the wildfowl were at the eastern end so a bit of a stroll was called for. The five Red crested Pochards, 4 males and 1 female, found earlier by Pete Forbes, were keeping themselves to themselves and generally staying together as a group. Apart from a Kingfisher and the usual Coots and Ducks the place was quiet and a search of the bushes and Sycamores only produced a single Siskin and again the usual Tits and Finches. 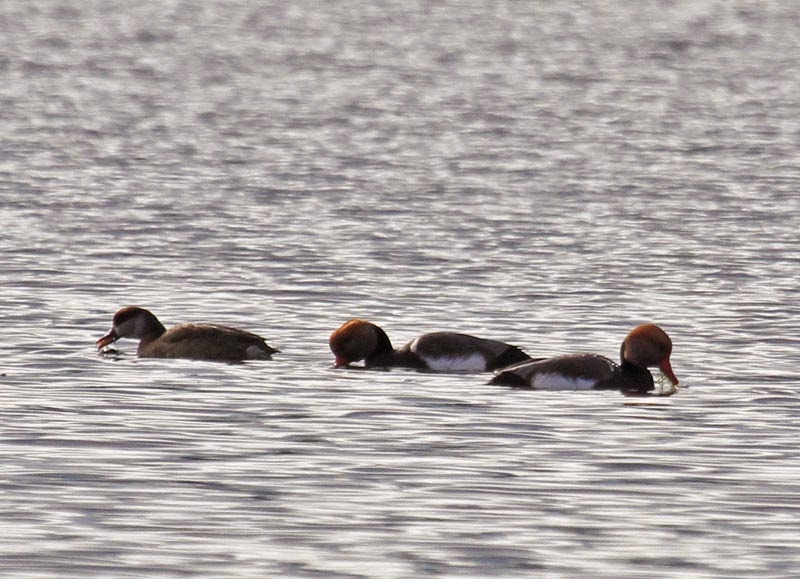 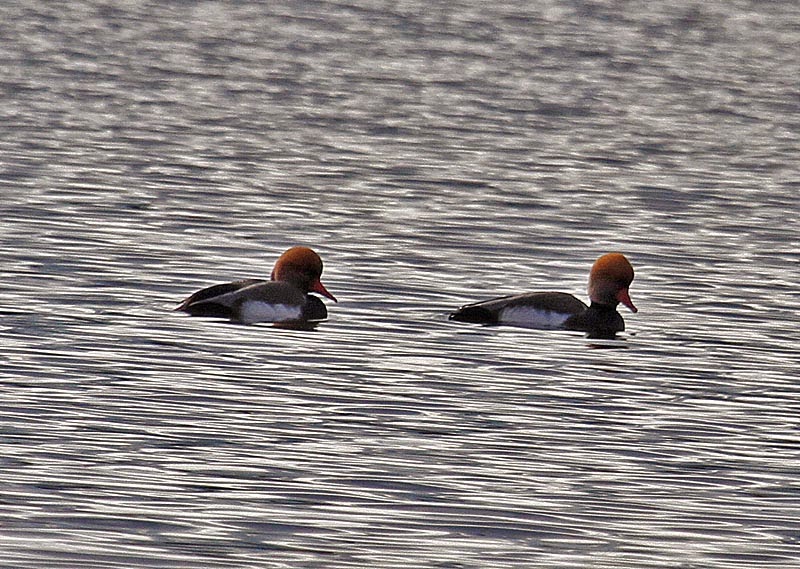 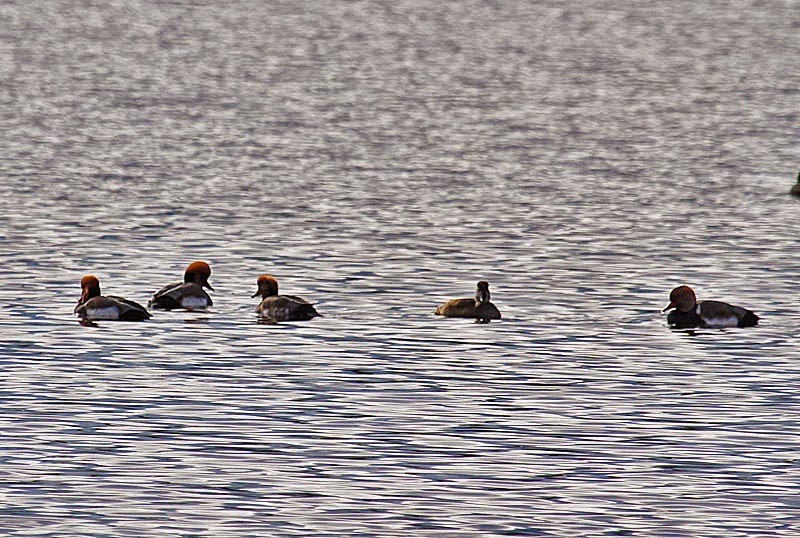 All 5 Red crested Pochards
Posted by bob duckhouse at 11:02 No comments:

Monday 3rd November 2014
I was a bit annoyed yesterday when I missed the chance of photographing a Mistle Thrush on the back lawn. Made up for it today though when a Green Woodpecker appeared in the garden. Not a garden first but a very unexpected visitor. 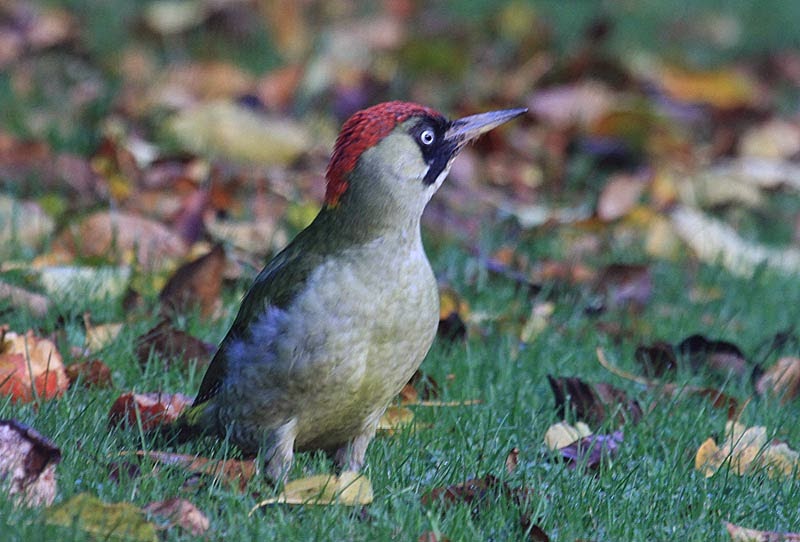 Green Woodpecker, garden
No sign of the Redwing, seen yesterday but encoraging to see 'winter' birds finding their way into the garden 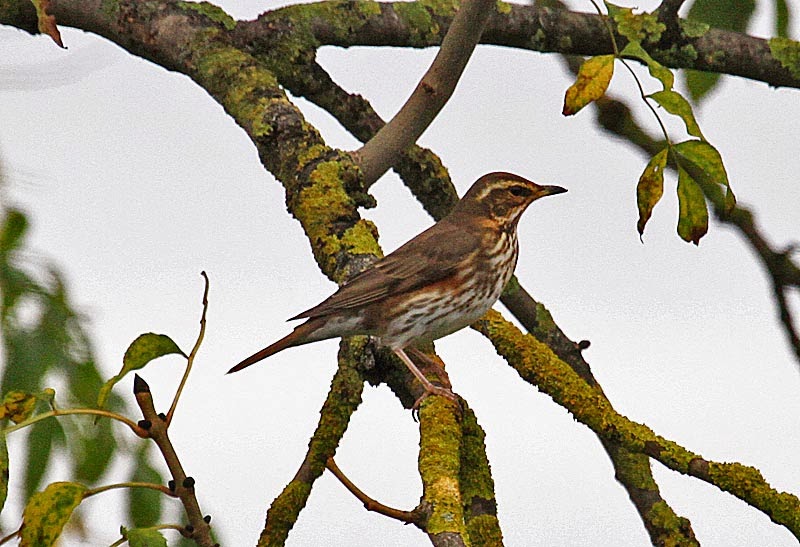 Redwing, Garden
Away from the garden there were a few birds about elsewhere. I walked from Broomey Croft to the north end of Middleton lakes. On Jubilee wetlands there was a single Black tailed Godwit and 15 Golden plovers as well as 2 Stonechats and a Cetti's warbler was heard. 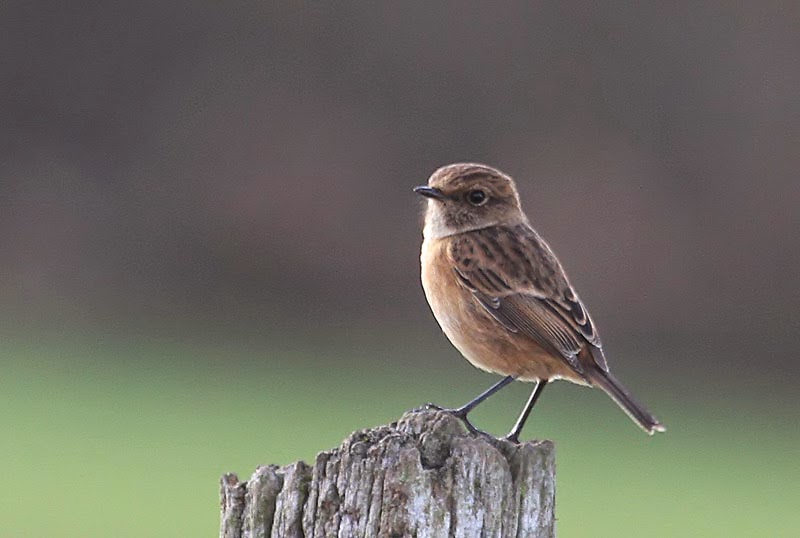 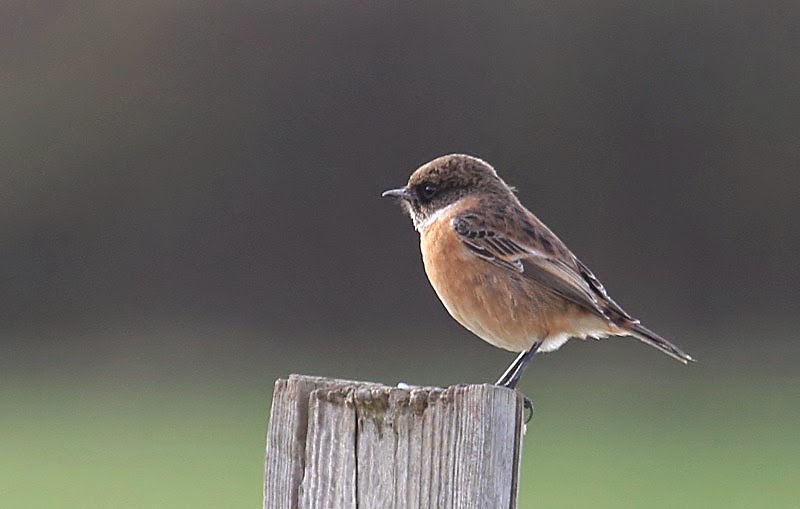 Stonechat
Posted by bob duckhouse at 14:27 No comments: