Blogs are rather more irregular than I would like but I'll try to catch up with the more interesting bits but not necessarily in the right order. A visit to Draycote Water was rewarding with fairly distant views of the Red necked Grebe ( thanks to Dennis Woodward) and my first encounter with the Draycote Hawfinch. Further visits to the river Anker have proved fruitless in terms of Firecrest but there are several Chiffchaff and a few Siskin. A walk up the hill at Mancetter was interesting as I managed the circular tour for the first , up the hill, shirt round the 'Hayes' and back along the canal towpath. The only unusual bird action was a stand-off between 3 R L Partridges in a close huddle and a Buzzard standing just 3 metres away. A case of safety in numbers. Ravens are becoming more active with their characteristic rolling flights.
An out of County visit to Albert village Lake produced good views (but not good photos) of the over-wintering juv. Black throated Diver. 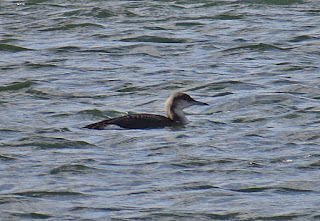 A couple of visits to Draycote Water for the Gull roost were very enjoyable. First time up I viewed from the Dam, not the ideal spot apparently so found myself all alone. Nevertheless still found a juvenile Glaucous Gull which I was chuffed with. Having spoken to John Judge I learned that the windsurfing shore was the favoured viewing area. The following day I positioned myself early and sure enough was joined by Theo and Martin, two Draycote regulars. It wasn't long before they picked out 2 Mediterranean Gulls, one in full breeding plummage. Two Iceland Gulls were also found as well as the juv. Glaucous Gull again. With Arctic conditions forecast for the next week further visits to Draycote may be interesting.
Posted by bob duckhouse at 07:19 No comments:

Despite several visits to the Hartshill Sewage outfall site there have been no further sightings of the Firecrest by yours truely. Numbers of other species namely Chiffchaff, Wren, Goldcrest, Robin and Grey Wagtail have remained largely constant. The Green Sandpiper, is still present and a Water Rail today was a first for me at this site.
The Caldecote Hall walk produced a pair of Stonechats on the flood meadow. Meadow pipit and Skylark were more evident than of late.
Yesterday, I felt the need for a change of scene and duly took myself off to South Warwickshire: to near Shipston on Stour to be more exact. I had been told there was a sizeable roost of Red Kites at a wood in the area. Sure enough the birds started to assemble in the late afternoon. It was a magnificent sight as small groups arrived from every direction and circled over a small wood. I counted 28 birds before the icey wind got the better of me. Apparently over twice that number had been recorded recently, but I thoroughly enjoyed the birds I did see.
Posted by bob duckhouse at 11:47 No comments: