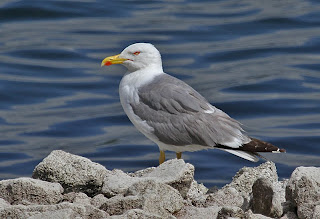 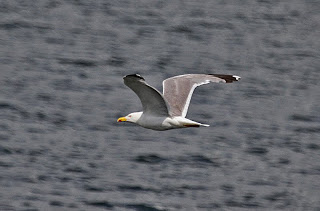 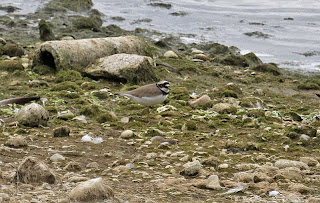 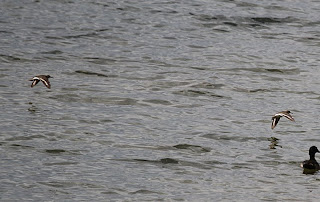 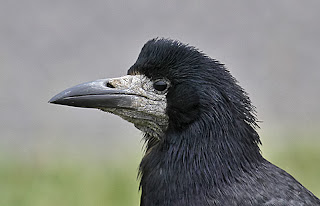 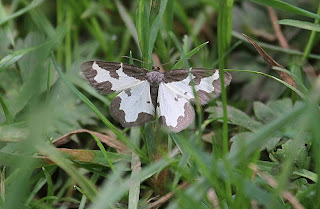 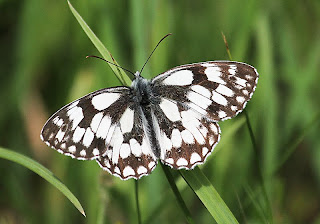 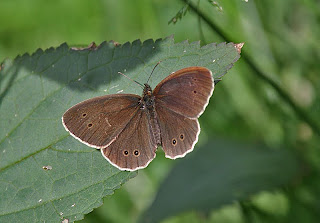 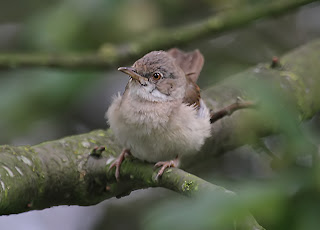 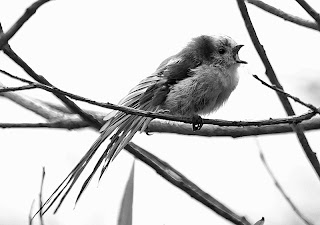 A young Long tailed Tit in Black and White

All very quiet on the Birding and Mothing fronts, and I cant work up much enthusiasm for trapping the same moths as last year or photographing the same Butterflies and Damselflies I've photographed many times before, beautiful as they may be. I could of course be developing my photographic techniques but then I use photography as a means of recording what I see not as an end in itself. Had a brief wander round the Fishers Mill area of the Tame valley yesterday though, good to see the well vegetated areas alive with tit and warbler fledglings but the only other birds of note was the 20+ flock of Stock Doves in the Cow field.
Today I had a long overdue visit to Draycote Water. Not too many folk about but there were a few black clouds looming. A sub adult Yellow legged Gull on the shore line and a single Common Tern was a good start followed by a pair of Grey Wagtails along Draycote Bank. A single Cormorant flew over high but not much else in the sky except House Martins and Swifts. In Biggin bay a party of 6 Common Sandpipers were feeding on the water's edge. The only other waders seen were 3 Little ringed Plovers in Toft Bay.
Posted by bob duckhouse at 01:28 1 comment: 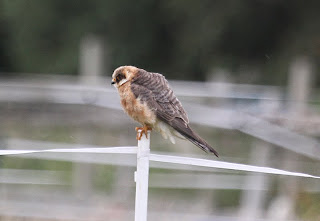 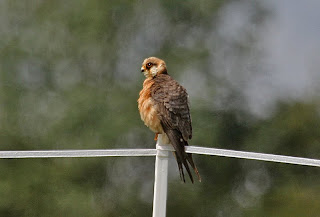 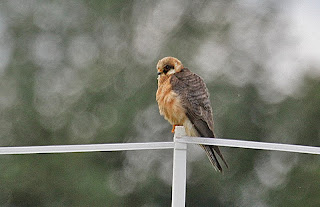 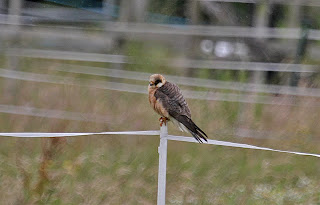 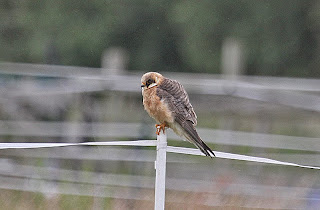 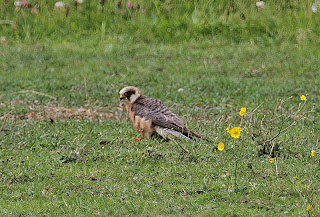 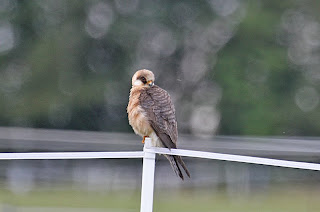 News of a 1st summer female Red footed Falcon at Breaston near Long Eaton, Derbys. had me foot footing it up the M42 just after lunch. The Sat Nav took me to the start of a footpath but it didnt tell me which direction to head in. Inevitably I took the wrong one just as the heavens opened I wasnt the only one to make the silly mistake or to get wet. Anyone thinking of going if the bird sticks around, should take the path (Nomad way) parallel to the road for 400 yards to just beyond the stables. Its a delightful bird, not an adjective often used to describe raptors but this is a real charmer.I'm sure there will be some amazing photos around in due course but in the meantime I'll post a few of mine.
Posted by bob duckhouse at 11:42 2 comments:

Back to the Tame

Monday 20th June 2011
I'm still suffering from car lag or post twitch fatigue syndrome, but I dragged myself round Middleton lakes, Coton and Shustoke this morning. The Safari hats were out in force at Fishers Mill but numbers decreased as I headed North. A number of Gulls, mainly Lesser black backs were loafing on Fishers Mill, north but there were also 3 Yellow legged Gulls. Two adults and what I took to be a second summer, sub adult anyway. The only other sighting of note was a flock of C30 Sand Martins heading South. At Coton the Mute Swan count was 113 birds visible from the hide and at Shustoke there were 4 Common Tern.
PS. Apologies for the lack of stunning photos from the Scottish expedition. It would have been nice to get some shots of the area and the Scoter flock which, as I said is very impressive, but the main aim was just to pick out and ID the four Scoter species present.
Posted by bob duckhouse at 08:52 No comments:

18th June 2011
John T picked me up just after eight for a little jaunt to Aberdeen yesterday. We picked up Gary from Kingsbury and Kris from Barnsley on route. Navigation in Barnsley proved challenging but we eventually headed in a northerly direction with our full compliment. The journey after that was uneventful and we arrived at the Murcar Golf club at about 5.30 am. There were maybe 20 birders on site already but no one had pinned down 'the bird' although there was plenty of speculation and 'have a look at this one'. It was an amazing sight, several hundred birds bobbing about on the sea mainly Common Scoter and Eider with good numbers of Velvet Scoter mixed in. The scale of the task of identifying a single American White winged Scoter amongst the ever changing flock was daunting although the main flock was a lot closer in than I'd imagined. Also the viewing conditions were good with no glaring sun to contend with. In my first sweep I picked out a Surf Scoter, a relatively easy achievement. It was great getting your eye in picking out Velvet Scoters and other and other species in the flock. After 20 minutes or so the guy just in front of me picked out a candidate for the AWWS, as more people got on the bird interest increased. Trouble was though, getting on tho the bird was easier said than done with Scoters constantly diving or disappearing in the swell. You needed a stroke of luck and mine was provided by a slow moving Red throated Diver which served as a focal point from which to navigate to the Scoter. Many thanks to the chap just in front of me for his help and knowledge. I think most people standing near the fourth Tee got on the bird before the rains came although there were certainly others that didn't. We made our way back across the Golf course to the car. Despite our best efforts one of the team hadn't managed to see the White winged Scoter, which was a shame after travelling such a long way but it didnt seem to bother him too much.
We moved on to the Ythan estuary with the rain now belting it down. Another Golf course another rare duck. Despite the rain the drake King Eider showed well, at least everyone saw that one. It had been a good morning, as well as the Scoters we'd seen Arctic Skuas, a variety of Terns and several Red throated Divers.With negative news on the Greater Sandplover thoughts turned to breakfast and the long journey home.
Posted by bob duckhouse at 01:10 2 comments:

Got nearly all the data in now for the BTO Atlas, just a question of sorting it all out and submitting it. Had quite a good morning checking out local farmland near where I live. Its good because I cover areas I wouldn't normally go. The area isn't spectacular in terms of birdlife as a good deal is urban and the rest mixed farmland so its good to find something like a small colony of Tree Sparrows or a pair of Grey Partridge as I did this morning. Also nice to see small flocks of Linnet and a couple of pairs of Yellowhammers in the area. The only other birds of note were a Little Owl and a couple of House Martins which have become quite scarce in the area.
Posted by bob duckhouse at 05:17 1 comment:

The one that got away 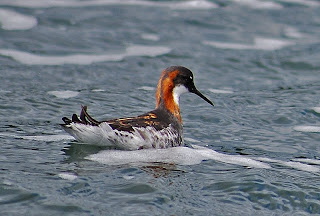 This amazing photograph of a Red necked Phalarope was taken at Shustoke Res., Warks. a fortnight ago from a Sailing club rescue boat by a member of the Sailing club. Apparently the bird was not seen by any local birders.
Posted by bob duckhouse at 12:32 No comments:

Is Birding a Sport? 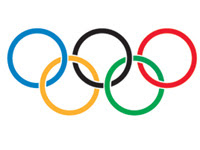 Wednesday 8th June 2011
Went shopping with Jan yesterday to Fosse Park, Leicester. What I mean is I drove the car to some shops at Fosse Park, which as far as I'm concerned is only memorable for the fact that it was the starting point for a dash to Nottingham for the Little Swift twitch in May 2001. I well remember dragging Jan and her shopping bags out of Next. Calming her with such phrases as 'they have shops in Nottingham too' and 'but its a Mega'. No such excitment yesterday. As part of my M&S avoidance strategy I had a browse round W.H.Smiths. I looked for the Birding Mags. Could I find them? - could I 'eck. Home and gardens - not likely. Health and Beauty- no chance. Sport nah. What about Hobbies and pastimes next to Trainspotters monthly - no sign. I went round again.I had a closer look at Sport having heard a rumour that Birding was being considered as an exhibition sport at the 2016 Games in Brazil, along with Rock climbing and underwater Volleyball. I must admit I hadn't taken the rumour seriously. Probably started by some Blogger trying to get a cheap laugh when he or she had run out of things to talk about. Anyway, it got me thinking about the feasibility of such an event. Certainly Brazil would be an outstanding venue for the event. Birding is certainly International and can be extremely competitive. Maybe, just maybe there's a grain of truth in the rumour. Of course the purists would reject the idea straight away and the BOURC would take until well after 2016 to make their minds up and then have to revisit the issue. There would be other problems to resolve: the format of the competition, would it be run on the popular Bird Race idea? Verification of species seen would be tricky but I'm sure LGRE could sort out any adjudication that needed to be done. Eqiupment would have to be standardised and the amateur status of competitors checked. Yes, there would be problems but it could work. Certainly worth thinking about?
Posted by bob duckhouse at 14:15 No comments: 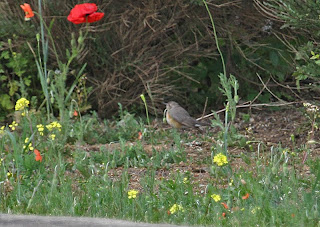 White throated Robin, Hartlepool headland, Cleveland
Monday 6th June 2011
I'm sure Ive been in this situation before but bare with me. I get a phone call whilst in the middle of morning ablusions so I'm dashing about with my trousers round my ankles and various bits of paper in my hand looking for the phone. I didnt know it was about a twitch but all the calls I've had over the last week have been important. Anyway it was John Terry informing me of the White throated Robin in Cleveland and suggesting we got moving. So we did. Thanks to some excellent directions from Tony Sheherd who was 40 minutes ahead of us we found the Bowling Club and as we pulled up the crowd were clearly focussed on the bird. With people giving the position of the bird I wrestled with my Tripod as the bird flew into some gardens surrounded my a high wall. We were reassured the bird had done this before and returned to the bushes at the edge of the bowling green. You couldn't but curse and think if only you'd got there a minute earlier. The minutes ticked by, if only we hadn't done this or that. No worries, people the other side of the green were looking at something. Thats it, the bird ran between the bushes and then stopped in full view before disappearing into the garden again. Brilliant with no need to resort to peeking over garden walls.
Posted by bob duckhouse at 12:11 2 comments:

The two that got away

Thursday 2nd June
Havent done much birding this week for one reason or another but did manage to miss a Red necked Phalarope at Shustoke last Sunday. Apparently it was missed by everybody except the guys on the safety boat at the sailing club who even photographed it. I'm trying to get hold of the photo to verify the record. I also missed a Red Kite over Ridge Lane, Atherstone. If I'd been sitting in the Church End Brewery garden rather than in the porch I would have seen it and been able to add it to my - birds I've seen while having a pint list. C'est la vie.
Posted by bob duckhouse at 02:52 No comments:

Life in the Reeds 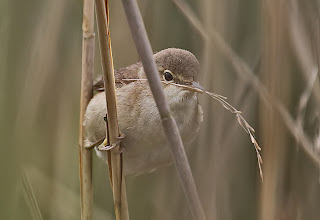 Reed warbler, a few images of some of the activity in and around our local reedbeds 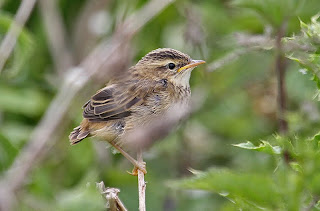 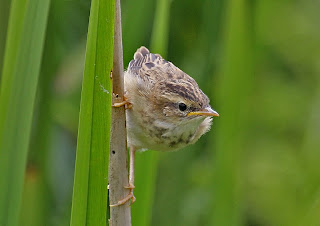 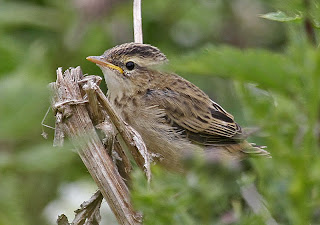 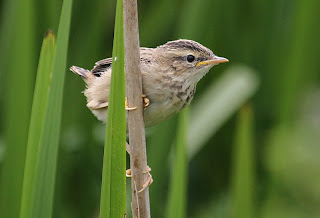 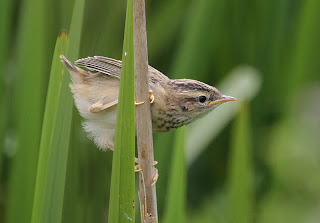 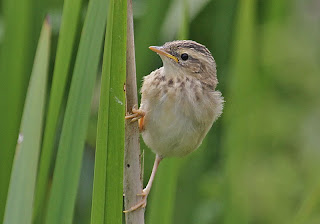 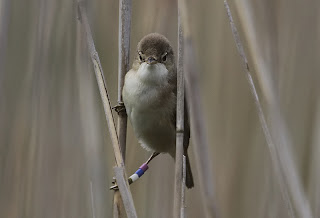 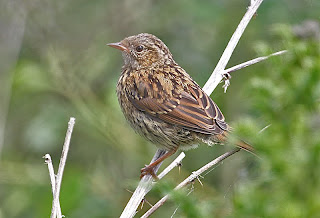 Wednesday 1st June
Posted by bob duckhouse at 01:26 No comments: