In search of the Black throated Accentor

The day started with porridge for breakfast followed by a 9 hour walk around the surrounding hills in search of the elusive Black throated Accentor. There had been some intel on recent sightings but despite an extensive search at the edges of the tree line we found only Dunnocks. The initial stages of our walk took us up the steep stream beds in the forest leading to boulder fields and grassy /heather covered areas higher up. Birds seen on route included Nutcracker, Black throated Thrush, Song Thrush, Common Crossbill, Olive-backed Pipit, Greenish and Arctic warblers, Common Rosefinch, Little Bunting, Brambling, Siberian Tit, and Willow Tit. There was no sign of the Black throated Accentor.
The following day we took the Mini bus to check the hillside a little further away. Again the initial stages of the walk involved walking up a steep stream bed for nearly an hour before emerging above the treeline in an area with scattered trees grassy slopes with small patches of snow. 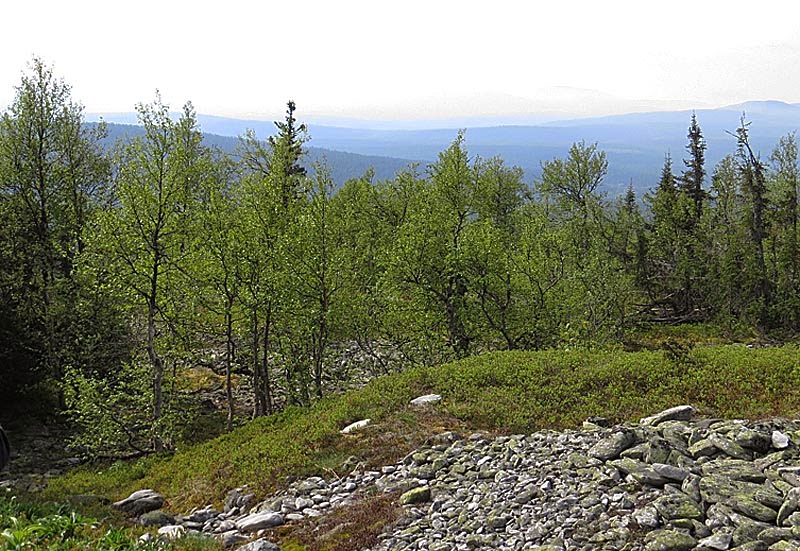 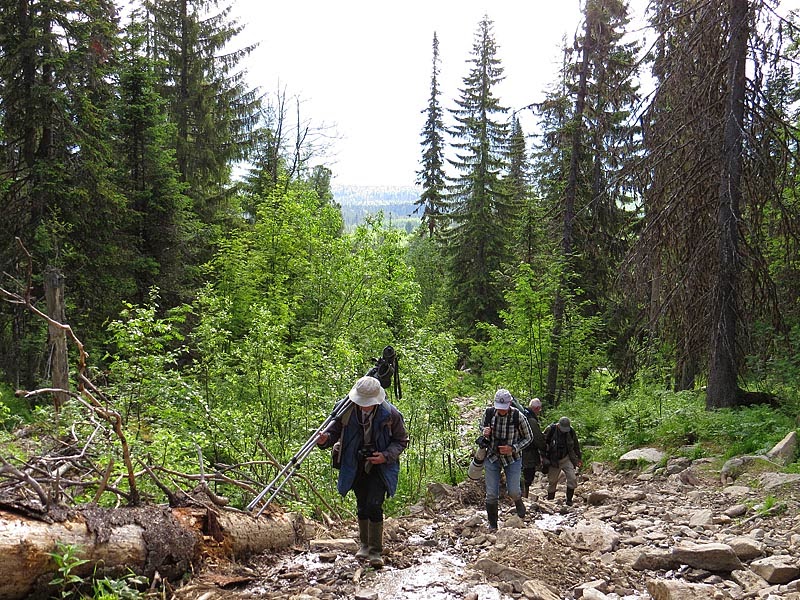 Following the stream bed through the forest 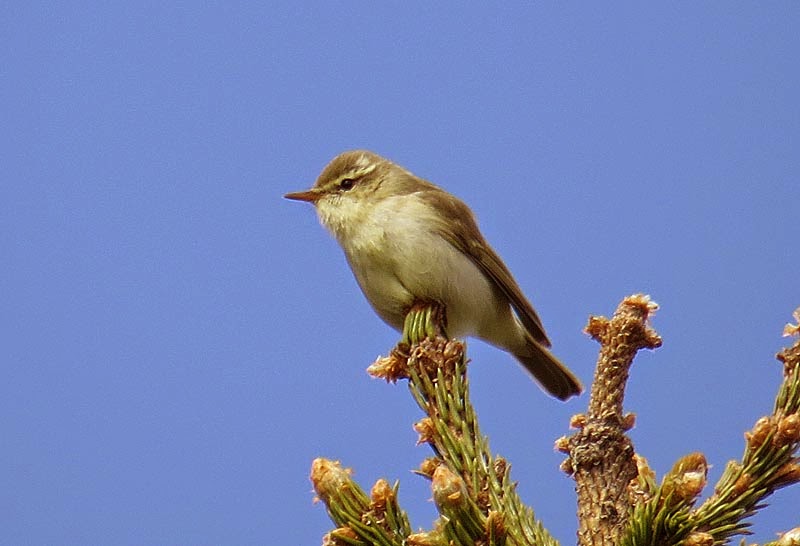 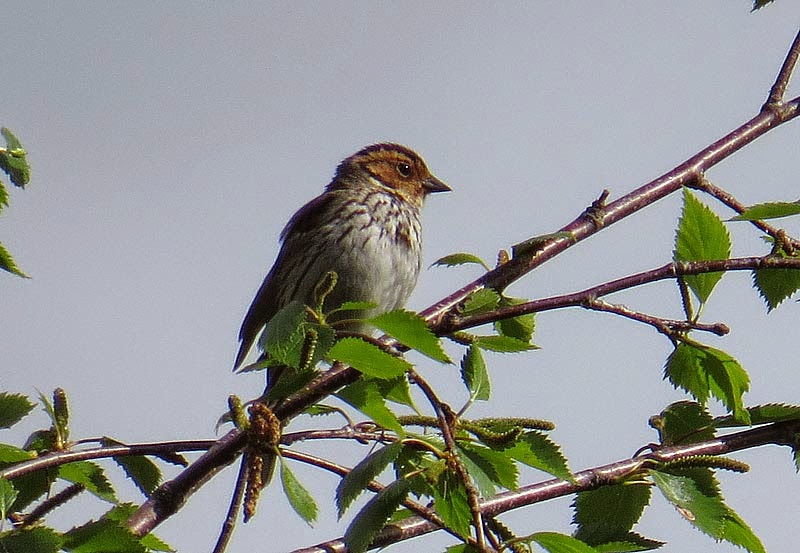 We were met by the sound of a Corncrake as we began to scan the groups of trees for the day's target bird, the Siberian Rubythroat. This was the bird I really wanted to see and all the discomfort and inconveniences of the campsite would be forgotten for a sight of this bird. When word went out that a Rubythroat was perched up in a Birch tree 100 metres or so away I was standing next to Roger K who was kind enough to let me use his 'scope. Initially the bird was facing away but then turned its head to reveal its stunning throat patch. We had further closer views as the bird moved around its territory. Unforgettable. 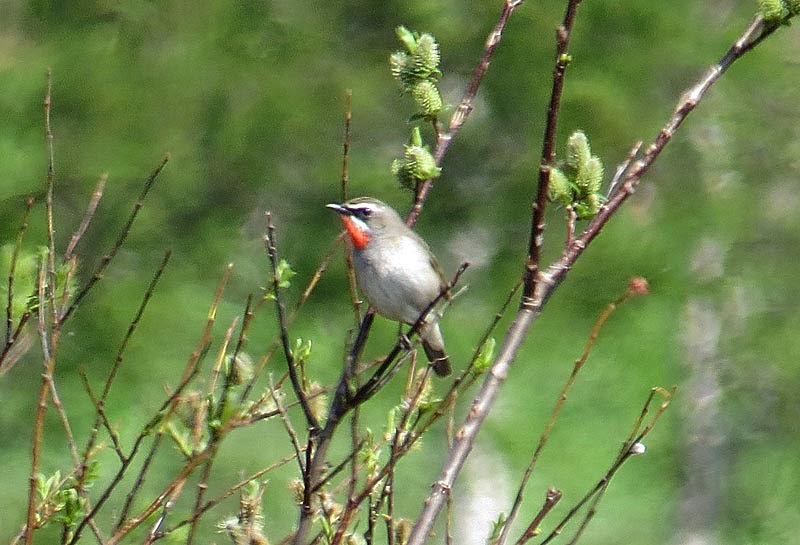 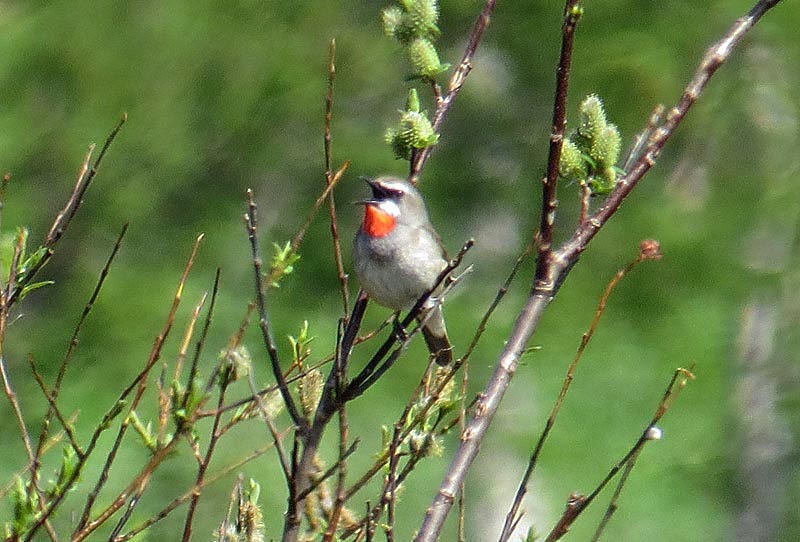 We moved on to search for another rarity of the area, Swinhoe's Snipe. We had a brief glimpse of a Great Snipe but no sign of the Swinhoe's. Other birds in the area included Fieldfare, Black throated Thrush, Yellow browed warbler and the eastern form of Lesser Whitethroat sounding very different from the birds we get in the UK. 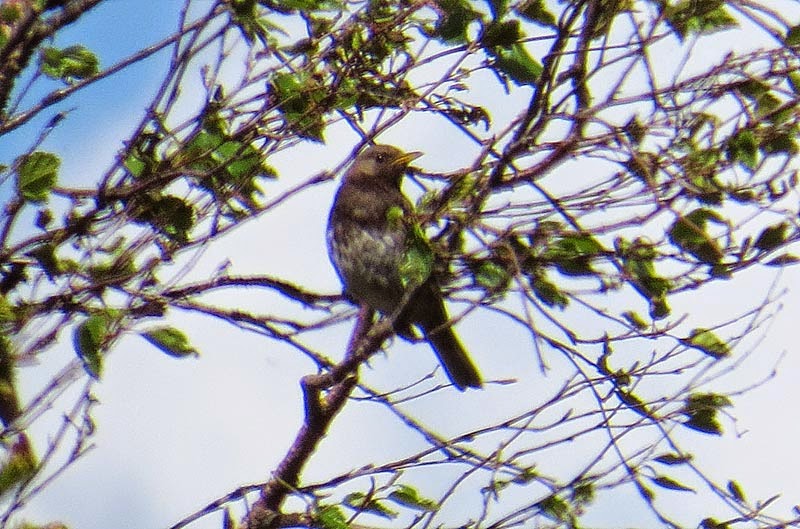 On the way down we had a close encounter with a Hazelhen with a brood of chicks, while
on the drive back we had Dipper and Common Sandpiper at one of the many river crossings.
Posted by bob duckhouse at 02:10 No comments:

Having travelled to the extremities of the Western Palearctic region in search of birds I had one last border to search. In the west the Cape Verde Isles, in the north Arctic Norway, in the south Egypt and Kuwait and now in the East, Russia. To be precise, the Ural mountains in Russia, a natural boundary between European and Asian Russia - Western and Eastern Palearctics.
The trip was organised by Birdfinders and involved two flights: to Moscow and then east again to the city of Ekaterinburg. After a welcome night in a hotel it was a long drive North to our base in the Urals. Before setting off though there was time for some birding in the local area. The 'airport marshes' to be more precise and our first chance to get to grips with many species common here but rare vagrants in the UK. So it was Wellies and Deet on for our first encounter with the ubiquitous Mosquitoes. As for the birds, Siberian Stonechats were particularly conspicuous but Blyth's Reed Warbler, Grasshopper Warbler, Booted Warbler and Common Whitethroats were also fairly easy to see. The two species we really wanted to see though were far more elusive. Eventually we did see a fine male Long tailed Rosefinch but there was no sign of Azure tit. 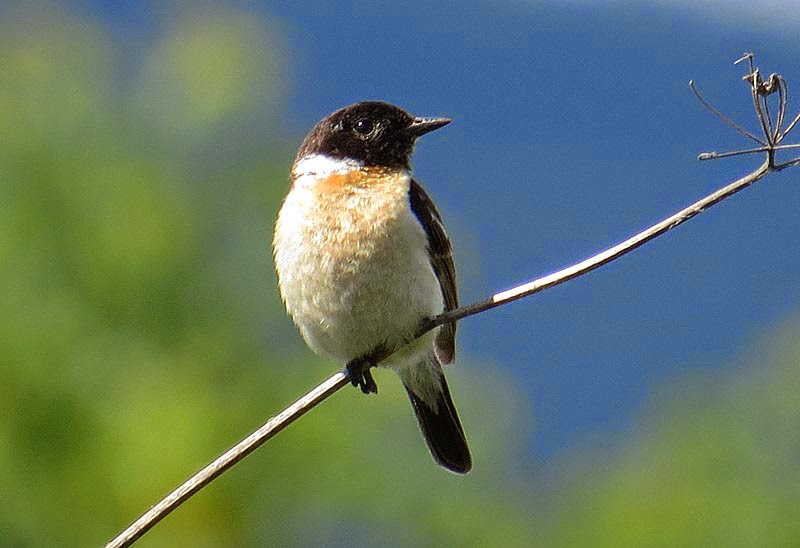 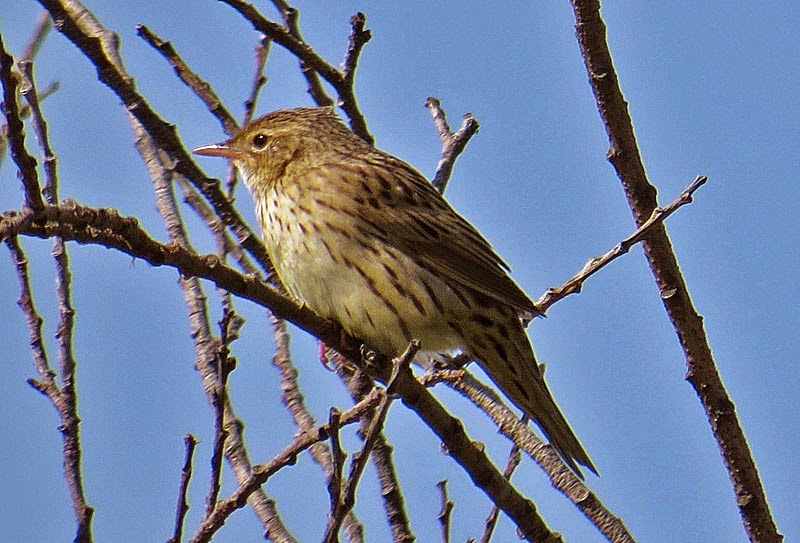 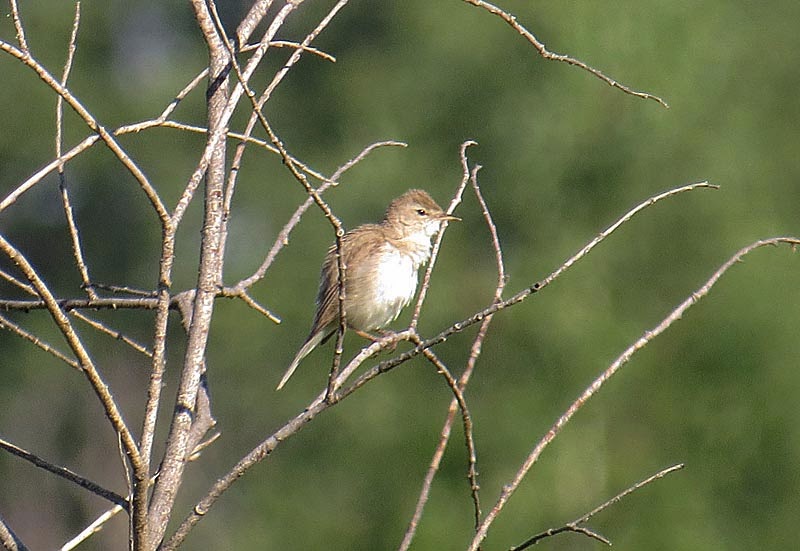 Booted Warbler
Our journey to the camp in the Urals was long and tedious. The first part involved 'good' roads through miles of forests broken only by rivers and occasional 'wooden' villages with bits of pasture. A few Black Kites drifted around but there was little else to see apart from the traffic. After 5 hours or so we turned on to a pot holed track. Our 'speed' was about 10 mph now as the driver tried to avoid the worst of the holes but we were still thrown about in the bus. River crossing was often extremely hazardous. We had to get out of the bus a couple of times because of partially collapsed bridges. 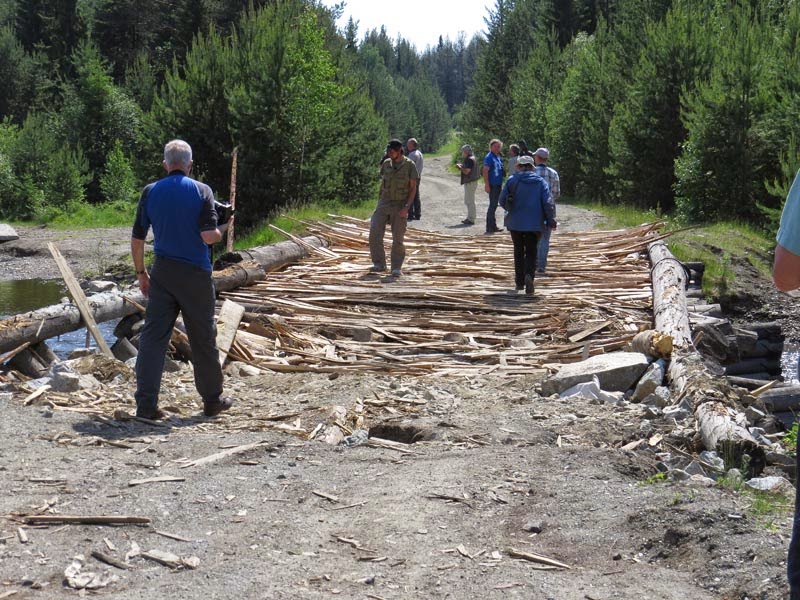 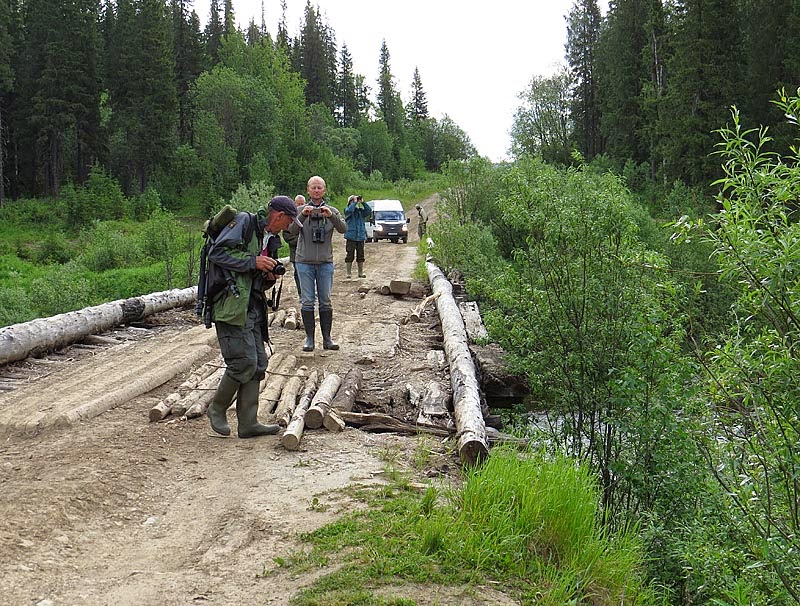 Another dodgy Bridge
The slow and bruising journey through the forest tracks took several hours before we reached camp at the foot of the Urals. We were warned that camping arrangements would be basic, just how basic we were about to find out, but in the spirit of the pioneers we familiarized ourselves with our accommodation for the next 4 days. 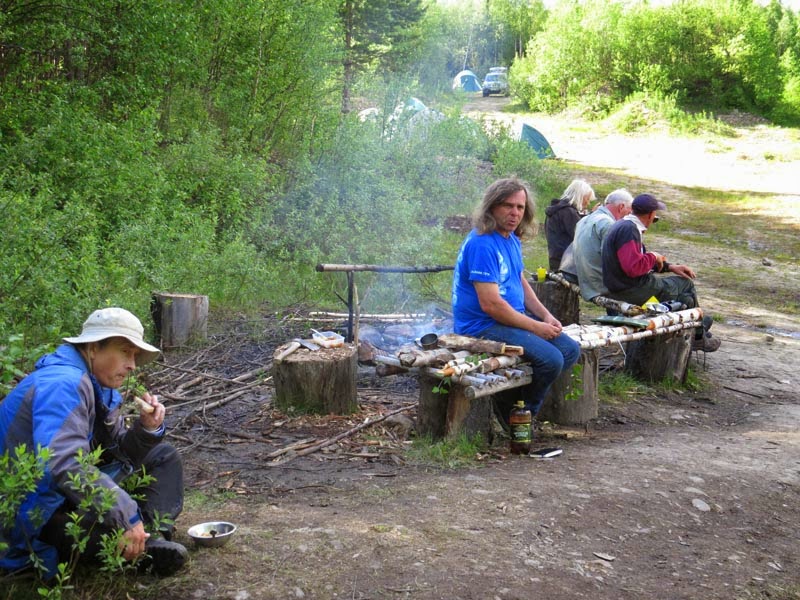 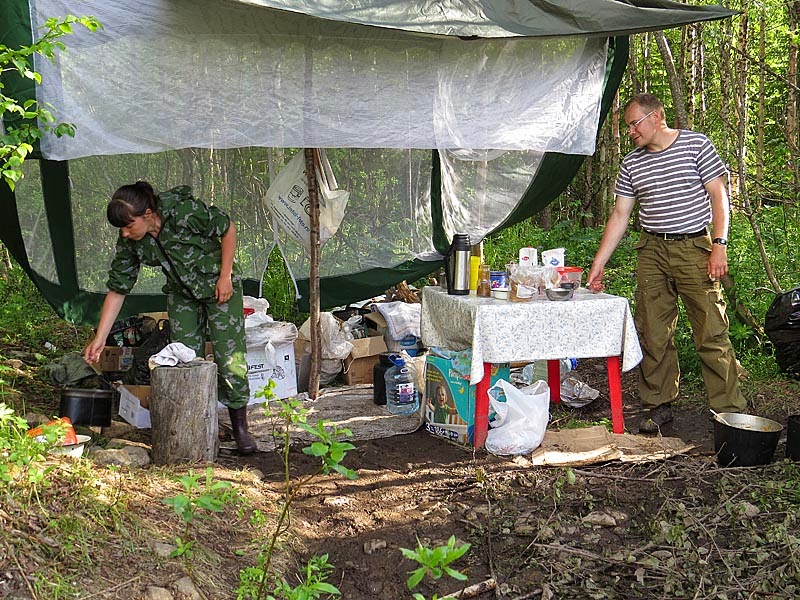 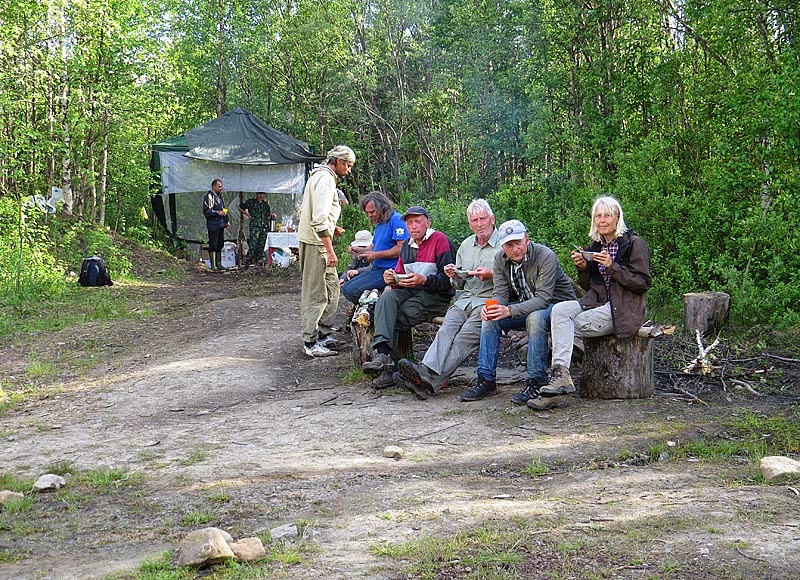 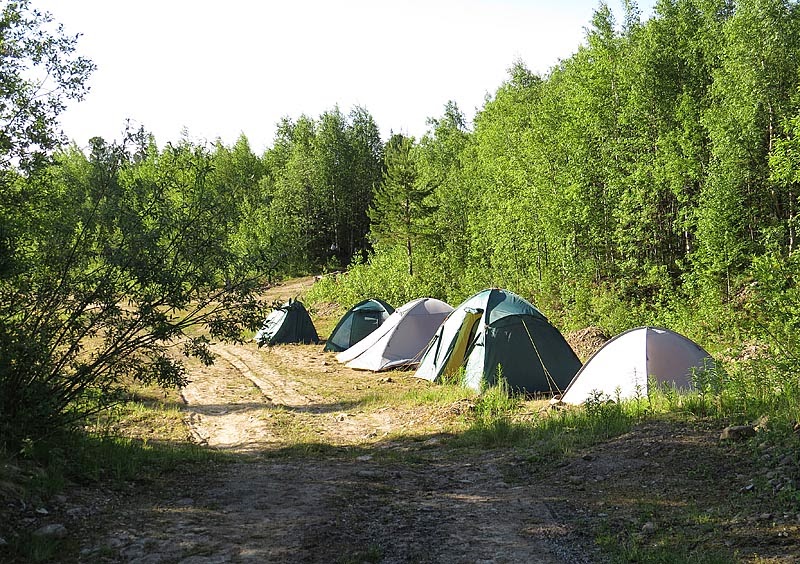 The Campsite
The first night under canvas was interesting. Not least because of the wealth of birdsong; an Arctic warbler competed with a Red flanked Bluetail from the tops of adjacent trees while both Common and Oriental Cuckoos could be heard nearby. Fascinating stuff but I was equally concerned about toileting arrangements in the middle of the night. Getting in and out of the tent alone was challenging but putting on footwear, avoiding the nocturnal fauna, braving the swarms of Mosquitoes in order to relieve myself would be quite demanding......and then the light bulb thing. I needed an intent container. In fact I'd field tested several contenders but in the end settled on a Fairy conditioner bottle. Lightweight, generous aperture and more than adequate capacity. Outstanding, practical and discreet. Ok so that was one little problem sorted but having a dump in the morning presented an entirely different problem. Its all very well this 'to the woods' attitude but for the ageing camper getting into an appropriate position demands certain physical attributes. Arm strength being one. Having found an adequate Birch sapling it would be necessary to hang on to it for however long was necessary to maintain the optimum position. And then there were the mosquitoes of course, an exposed Buttock presents an opportunity not to be missed.
Despite all my apprehensions I did get a good night's sleep dreaming of the 'ticks' the next day might bring.
Posted by bob duckhouse at 07:17 2 comments:

Thursday 5th June 2014
After having a few 'things to do at home' days. I decided on a day out in Norfolk. I'd seen Spectacled warbler before in Suffolk but a very long time ago, so that would be the starting point of the day. After a walk along the sea wall at Burnham Overy I reached the dunes and a small group of Birders focussed on a strip of low vegetation. After a couple of false alarms the bird was finally pinned down but it was some time before I got a good view let alone a picture.  The weather had deteriorated to a fresh wind and steady drizzle. Not your ideal conditions for warbler watching, but as the bird became more predictable it was possible to get a few images. 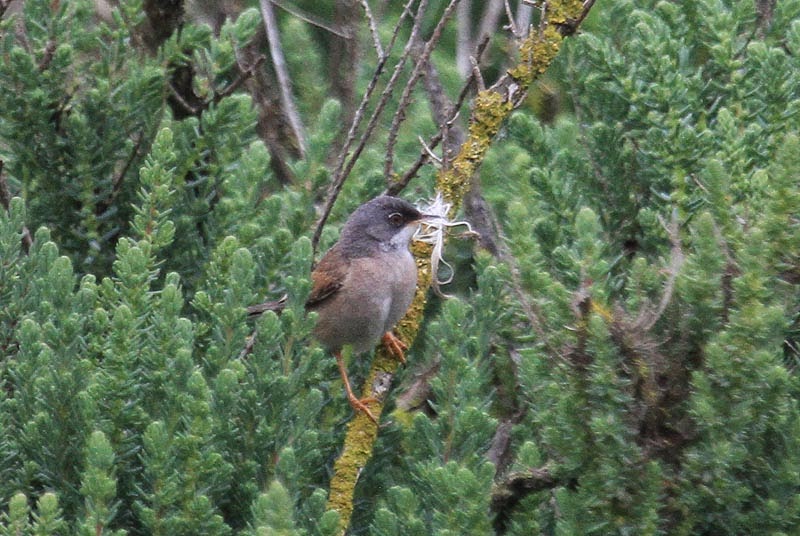 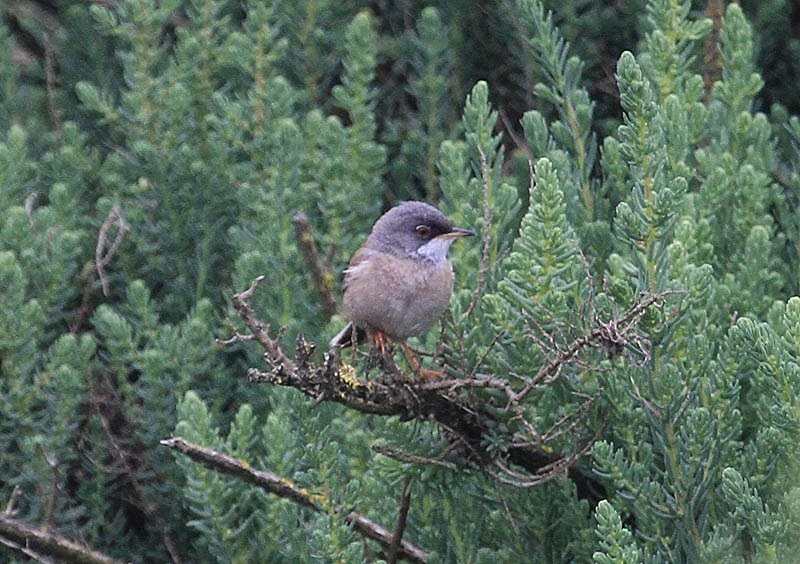 Spectacled warbler
With the skies brightened I checked my pager. OMG Red backed Shrike at Ladywalk N.R., a county 'tick' on my doorstep. Decisions had to be made, with the sun coming out there was the prospect of some decent photographs of the Spectacled warbler and the thought of a long drive and rush hour traffic... But a Warwickshire 'tick', and daylight wouldn't be an issue. Go for it. After the expected tortuous drive I arrived at Ladywalk with the male Red backed Shrike still on the same tree stumps. What a cracking looking bird, outstanding and well worth the 'twitch' from Norfolk. Thanks to Dennis W. for keeping me informed. 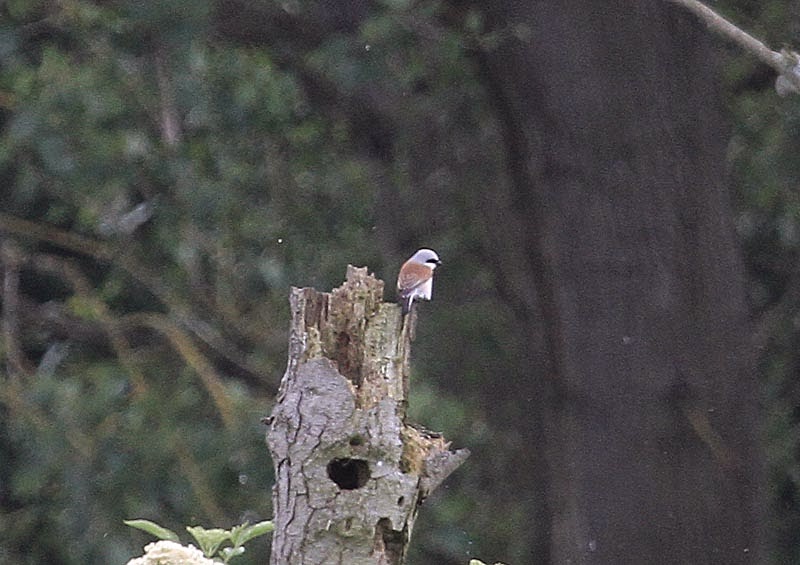 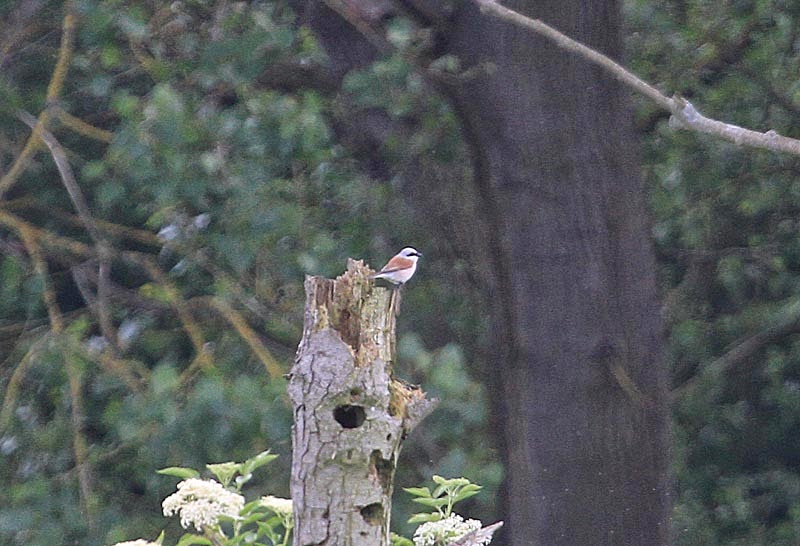 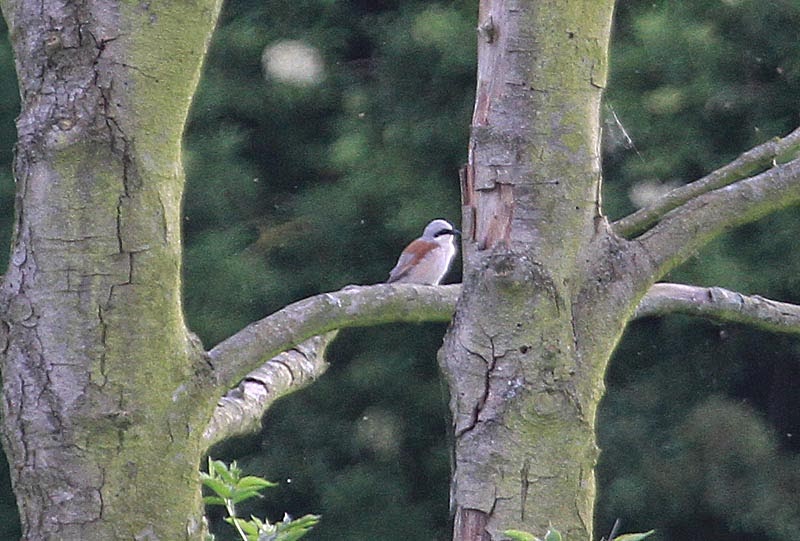 Red backed Shrike
Posted by bob duckhouse at 00:17 No comments:

Sunday 1st June 2014
Travelled down to Wareham Forest in the early hours with John Terry to try and see a Short toed Eagle at Morden Bog Nature Reserve part of Wareham Forest in Dorset. We were optimistic as the bird had been seen quite late into the evening of the previous day, so if we got there at dawn the chances of seeing the bird were pretty high. What we hadn't reckoned on was the mist which rolled in as the dawn broke obscuring the roost trees in the distance. Patience was required as the mist partially cleared and then blanketed the distant trees again. Eventually patience was rewarded as the mist finally dispersed and the sun broke through, 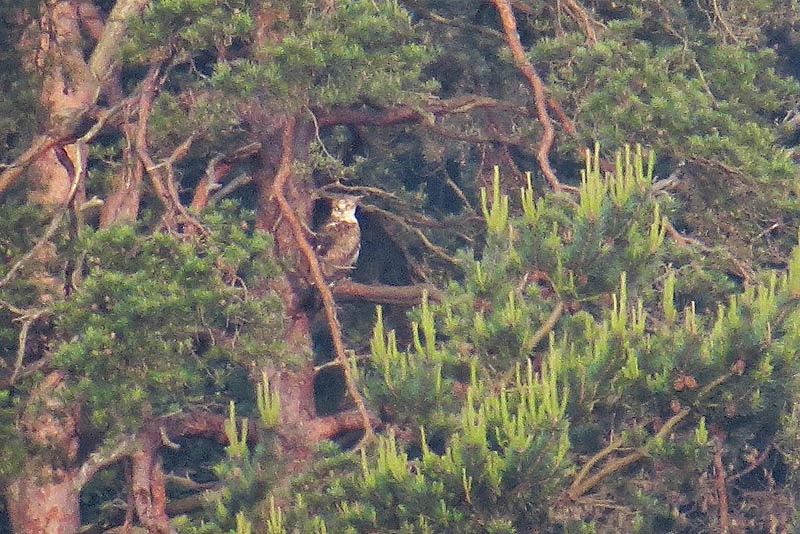 allowing good scope views of the Eagle perched on a bare Pine branch where it remained for several hours. 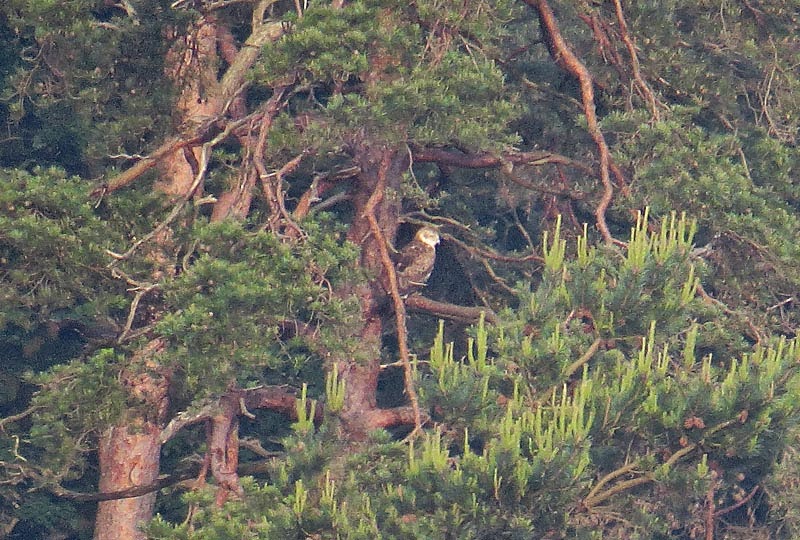