Blue Rock Thrush in Stow on the Wold 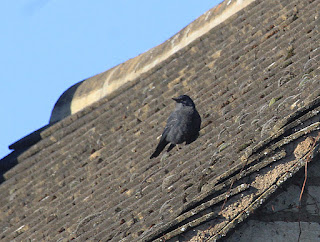 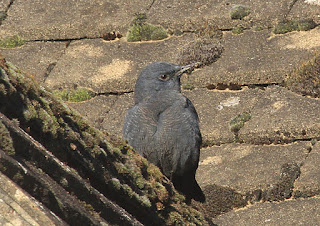 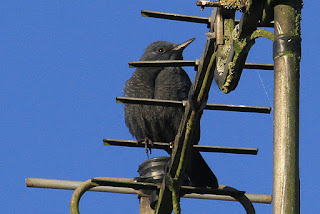 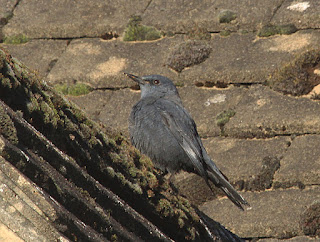 T'was the week before Christmas

I'm delighted to report my pre- Christmas blues didn't last very long. I'm keeping away the crowds as much as possible. My queue phobia meant I had to make 3 attempts to collect a pre ordered Turkey from the Butchers. Traffic has also been a nightmare. Anyway  time has generally been split between a bit of local birding and being i/c purchasing essential provisions : drink, pickles and Pork products plus a few Samosas for good measure. As far as the birding is concerned Bird of the week, by some distance, has been a Woodcock seen at close quarters in some local woodland.
Posted by bob duckhouse at 14:47 No comments:

I've just been looking at some Blogs of the past. I know its better to look forward than back but on a miserable evening in early December its interesting to see what you were up to last year and whether your mood was less sombre. I keep telling myself there will be a Hawk Owl or a Eye browed Thrush found but I don't really believe it. Be nice though. Last year's Blogs around this time talked about the usual winter visitors, the usual Great northern Diver at Draycote the odd Redwing in the garden and a bit of banter about Beer. All good stuff.
I've been delving into the Archives as well digging out some old note books going back to 1986.  My interest in birds goes back well beyond that though. I was bought my first Bird book, the Observers Book of Birds in 1955 and started ticking.
I was very limited to some very local birding last week but I'd noticed a decent flock of finches flying over a Corn stubble field within a short walk from home. I presumed the birds were Linnets but needed to see them in less gloomy light and not driving a car, to confirm. They were indeed Linnets, a good flock of 60 or so birds. Shame that the field they and several other species were using to feed may well be lost to housing development in the not too distant future.
Took the opportunity to visit Draycote after a present exchange in Coventry, had reasonable views of the G N Diver, 2 of the 3 Scaup and 4 Dunlin. I stopped off at Brandon on the way back saw Kingfisher and a couple of Goldeneye but nothing else of note. Did the 'Mancetter walk' yesterday. another Kingfisher and the resident Grey wags, were along the river.
On the adjacent fields were flocks of winter thrushes and Yellowhammers but no sign of any Tree Sparrows in the hedges or Chiffchaffs in thr riverside bushes.
Today I visited Alvecote pools and saw yet another Kingfisher, 2 Great white Egrets (both on Mill pool), 10 Little Egrets and 2 Stonechats (both male).
Posted by bob duckhouse at 11:54 No comments:

The lure of a Midlands tick and seeing another 'eastern' rarity was too strong. After a difficult journey in the fog and with a couple of changes of route because of accidents and heavy traffic I arrived at the village of Beeley in Derbyshire. Birders were strolling around the village which wasn't a good sign. I decided to join a group at THE orchard. There had been no sign of the Dusky Thrush for some time. I waited and waited, no sign. The best thing was an enterprising young lady selling punets of chips to very grateful Birders who had been waiting a good deal longer than I had. Eventually the call of nature and a need for a Coffee forced a retreat to the car. On the way back I joined another group on the playing field. To my amazement the people I was standing next to were actually 'on the bird' I'm sure other people just a few yards away had no idea the Dusky thrush was on view in the Hawthorns. I'm sure the info filtered through eventually and most people got on the bird. 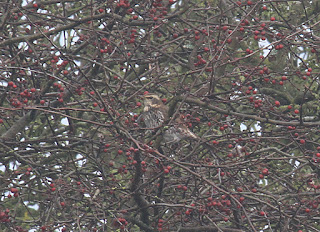 Monday 5th December 2916
Travelled to South Wales today with Tony Shepard and Dave Abbott. Uneventful journey apart from seeing a couple of Red Kites overhead. We arrived at the village of Camrose and almost immediately were alerted to the Wagtail on the road by a concerned motorist. The bird continued to give excellent views both on the roofs of the houses and on the road where these photos were taken. 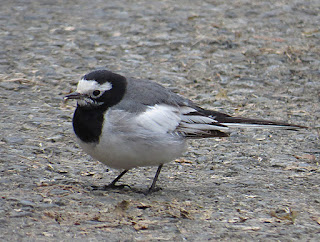 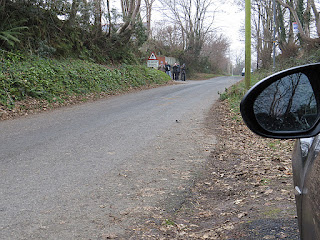 View from the car 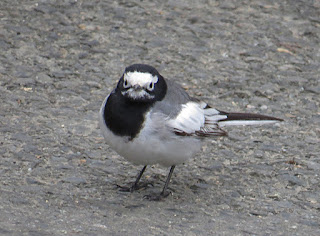 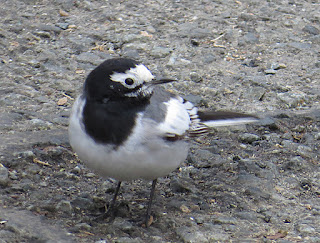 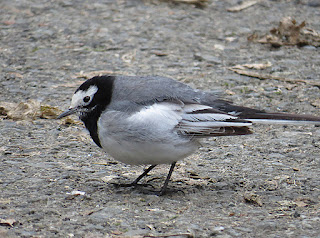 Redwings arrive in the Garden

Not much to report being preoccupied with domestic issues, but did get out for a walk around the fields near Mancetter. At the Woodford Lane sewage outfall there were 14 Teal, but apart from the usual pair of Grey wagtails and a flock of some 20 Yellowhammers on the stubble fields not much else. No sign of any Tree sparrows or Chiffchaffs in the riverside bushes yet.
Sunday saw a bit of Garden action with a small flock of 17 Redwings in neighbouring gardens with a couple taking a few Siberian Crabapples from my garden. Before a male Sparrowhawk arrived keeping tabs on the flock, 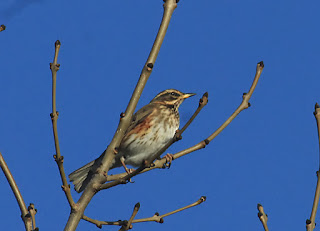 Redwing - garden
Posted by bob duckhouse at 11:48 No comments:

The coldest spell of the year coincided with my Boiler playing up so in trying to get it sorted there hasnt been much time for birding this week, apart from a couple of visits to Bentley wood, near Atherstone. Today I had a walk round the Mancetter circuit. 50+ Redwings and a couple of Ravens were seen. I extended the walk by following the canal towpath south. There used to be a feeding station by the moorings which attracted Tree Sparrows in previous winters but no sign today. Further on the canal runs quite close to a small lake, part of which can be viewed from the towpath. As I scanned the bit of the lake I could see a few Mallards came into view followed by a drake Mandarin which in turn was followed by another male and a female Mandarin.
After a bit of shopping I carried on to Alvecote pools. As I drove to the Pretty pigs lake a Great white Egret flew over the road towards Mill pool. In all I saw 2 Great white Egrets, 4 Little Egrets, 2 Snipe, 94 Mute Swans,  Black Swan, 2 Shelduck, and 9 Meadow pipits.
Posted by bob duckhouse at 14:26 No comments: