October provided a rather mixed bag of Birding experience as it  so often does. The end of September into early October had seen a good number of migrants particularly Redstarts on the local patch-walk. My first 'twitch' took me to Hornsea Mere, E.Yorks in the early hours. A White rumped Swift had shown well over the Mere the previous day but unfortunately there was no sign the following day. Despite the need for sleep when the chance came for a lift to Cornwall I was up for it. A Catbird had turned up at Lands End, and thanks to John Holtham we were on our way. We had to wait some time before the bird appeared but our patience was rewarded as we got stunning views later on. The third twitch of the month took me to Salthouse N.Norfolk to see a very showy 'eastern Stonechat' the exact identity of the bird has yet to be determined but it was/is an interesting bird non the less. Thanks go to Tony Shep. for the lift. So after a burst of frenzied activity producing one 'tick' its back to the local walks. Not much to report though.A barn Owl was a nice surprise near Alvecote.Stonechats at their usual winter sites and incoming Thrushes, Larks, Starlings over 'the hill'. 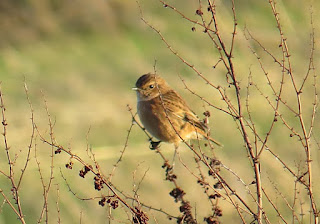 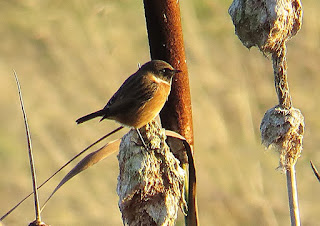 Stonechat
.
Posted by bob duckhouse at 07:07 No comments: