Making the best of it.

Thursday 28th June 2012
Well its official I'm a dam site better at finding pubs than birds. Went up to New Brighton yesterday for a coffee and chat as it turned out. No sign of the Little Swift but then you kinda knew that before you left. I basically fancied a day out after commitments and lousy weather earlier in the week. I didnt 'need'  Little Swift but I like to have a couple of sightings at least of 'rares' on my lists. Anyway, to be positive it was a nice sunny day, nice views of the Wind turbines around Liverpool docks, cup of tea (not coffee) at Morrisons, and an in depth, wide ranging discussion with Bernard Smith. Oh, and as if that wasnt enough there was a car fire near Corley services on the M6. Going for a pint of Goats Milk at the Church End Brewery tonight, lets hope that doesnt disappear before I get there but last confirmed sighting (and tasting) was last Sunday.
Posted by bob duckhouse at 02:08 No comments: 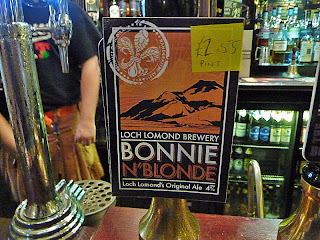 A couple of beers from independant Scottish Breweries, sampled in Glasgow City centre. Barman wearing a kilt was a nice touch I thought. 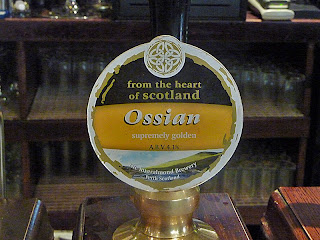 Monday 25th June 2012
So what do you do on a long train journey? Read a paper, do a crossword or sudoko, sleep, talk or text incessantly on a mobile phone? Last weekend I went up to Glasgow by train. A new experience for me, at least since the age of steam when they had real engines. Unfortunately it rained most of the journey, in fact it rained most of the weekend, so we were deprived the glorious views of the mountains as we headed north through the low cloud.
It was an interesting weekend though, getting into the local Glaswegian culture with visits to my daughters print exhibition, local pubs and gigs with local bands promoting their talents.
With better weather on the return journey I decided to do a list. Birding from a fast moving train is not much fun but its slightly better than doing a crossword puzzle. I ended up seeing a meagre 28 species during the 4 hour journey from Glasgow to Birmingham. The most interesting sight was probably 100 or so Sand Martins flying around a sandy river bank somewhere near Carlisle. The commonest species was Lesser black backed gulls which like the Corvids were seen throughout the journey. It wasnt until Stafford that I saw my first House Sparrow but generally small birds were impossible to see unless they popped up at a station or before the train picked up speed.
Posted by bob duckhouse at 12:25 No comments: 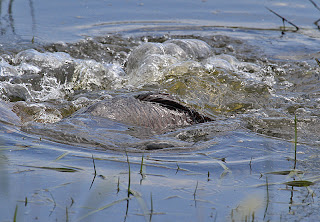 Common Carp﻿
Not much to report, in fact the only thing of interest was watching Carp spawning at a localish pond. I was amazed at the size and number of Common Carp involved. The water 'boiled' with their exertions. 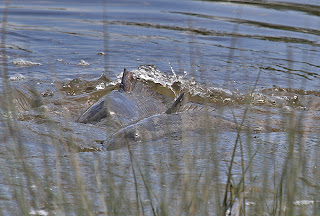 Common Carp﻿
Posted by bob duckhouse at 02:50 No comments: 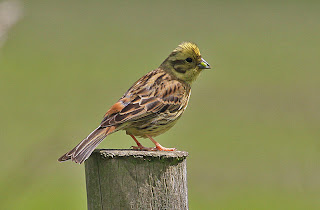 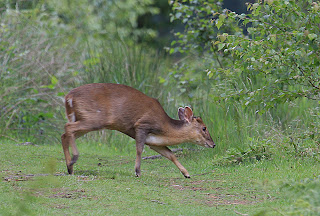 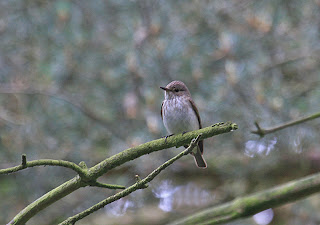 Spotted Flycatcher
Now theres lucky. I nearly creosoted the garden shed today ( I nearly do quite a few things in the garden, and the house come to think of it) but theres always something more important to do. If I had used preservative of some kind then the Dark/Grey Dagger wouldnt have settled on it (the shed) for the day. I havent been running a trap so it was good to see a moth in the daytime I might do a bit if it warms up there are obviously a few moths about. There were a couple of bats over the garden at dusk yesterday which was good to see. Not many Butterflies about though. Didnt see one today walking over the huge Wheat fields near Austrey but they were spraying pesticides. As for birdlife there was quite alot of activity particularly in the hedges with Reed Buntings particularly numerous, but Linnet, Yellowhammer, Common Whitethroat, Lesser Whitethroat and Skylark with a pair of Corn Buntings flying over were noted.
The highlight of visits earlier in the week to more local sites had been 3 Spotted Flycatchers but there has been no sign on subsequent visits. Visiting the Tame valley mud didnt produce any 'nice little surprises' There was a whole lot 'o loafin going on though with Black headed gulls and Common tern waiting for water levels to stabilize as most of the breeding islands have been submerged several times already this month. Plenty of Reed warblers taking advantage of the Reed planting at Fishers Mill and Cuckoos taking advantage of the Reed warblers.
Posted by bob duckhouse at 01:34 No comments: 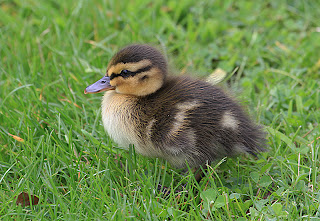 Mallard chick
OK, Common enough sight around most bits of water in the region but a word of warning to those who might have gone Arrrr. Read no further. Today I witnessed another of the harsh realities of Nature. I was minding my own business at Shustoke Res. when I found myself sharing the same newly laid piece of grass as a family of Mallard. Mother Mallard and FOUR ducklings. After a couple of minutes the Ducklings got bored with my company(can you believe it) and headed for the water. I carried on counting Common terns, I reckoned on 25 but there may well have been more. Anyway I became aware of something watching me, unfortunately my camera was not at the ready as a Polecat type creature peered at me 4 feet away. I deduced that in fact the polecat was more interested in the Mallards than me, as the next time I saw the Mallard family they were down to 3 ducklings and keeping well away from the bank. It was a case of dammed if you do and dammed if you dont though as within seconds the Mallards had lost another duckling.This time to a Lesser black backed Gull. How rotten is that. The gull carried the unfortunate ducking out into the centre of the res before killing it and swallowing it whole. 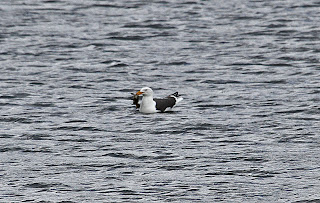 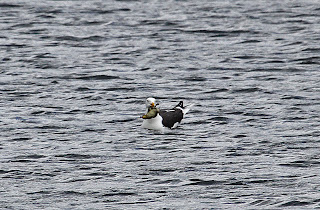 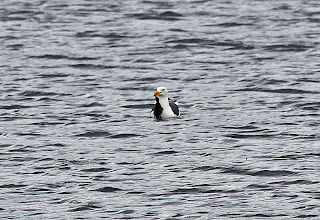 Moving on from Shustoke I popped in to Coton pools but saw nothing 'new'. At Kingsbury Water Park a Hobby was circling over Canal pool and an Eygptian goose was a welcome find on Cliff pool. 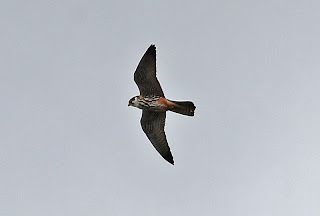 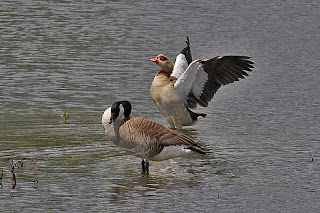 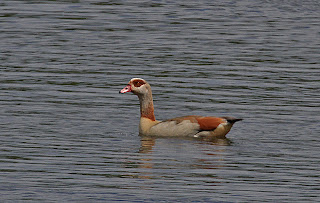 Eygptian goose
Posted by bob duckhouse at 01:52 No comments: 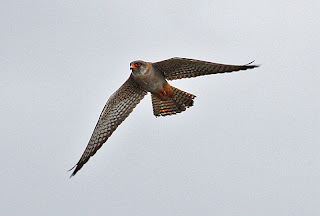 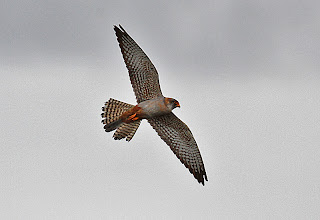 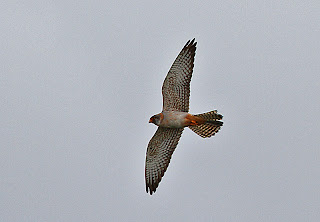 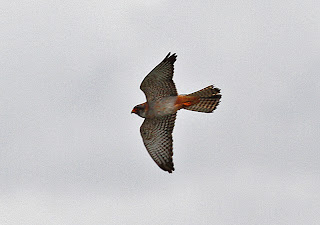 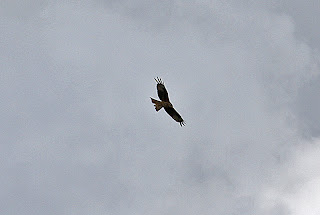 Red Kite, Wellesborough, Leics.
﻿
Went over to Willington, Derbys. to look for the 1st summer male Red footed Falcon and to be honest didnt have to look too hard. A small group of birders were on site watching the falcon over the opposite bank of the river as I arrived and the bird continued to feed over the river bank for the next 20 minutes or so. Luckily the showers were not too heavy at this stage but the clouds became increasingly threatening and Dennis Woodward and I decided we were not going to get any better views and made our exit. We almost made it back to the cars before the heavens opened but still avoided the worst of the torrential downpour. On the way back I pulled in near Wellesborough, Leics. to watch a Red Kite soaring over the A444 before the next shower came through.
Posted by bob duckhouse at 11:20 No comments: 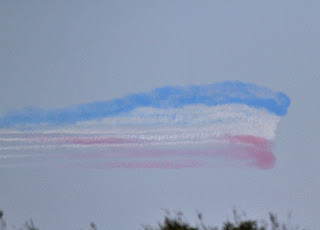 The Red Arrows
Unfortunately,  a display by the Red Arrows, part of the Queens Diamond Jubilee celebrations, had to be called off due to the very low cloud base, shame cos it looked pretty impressive during practice over Cyprus, perhaps they'll be able to use the routine for the Olympics.﻿
Posted by bob duckhouse at 08:35 No comments: 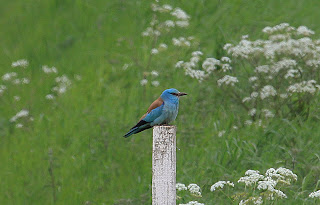 Roller, Aldborough, E, Yorks.
A week which typified the Birder's lot began with missing out on the wader passage, such as it was, through the Tame valley due to commitements in London. This was followed up by dipping on the 'biggy' in the form of the Orphean warbler at Hartlepool headland. Local patch watching in the Tame valley and around Caldecote, near Nuneaton also proved very quiet, the highlight being Sedge warbler found at a new location. The week ended on a high though when I got a call from Julian Allen as a was in Sainsbury's. Did I want to go to Aldbrough, E.Yorks for the Roller? I must admit I hadn't been too excited about the bird when news broke as I'd overdosed on Roller in Cyprus but the prospect of Julian's company for the day, getting out of Sainsburys, and a Yorkshire tick was too much to resist. I grabbed a Pork pie from the next aisle and headed off to meet Julian on the M42. The Roller showed well in a ploughed field just outside Aldbrough, south of Hornsea feeding on insects on the ground. A stunning bird and a good end to the week. 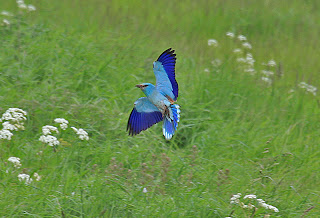 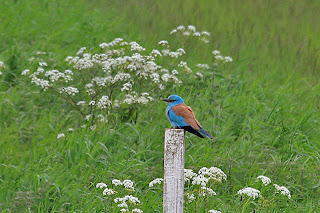 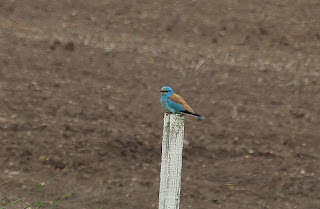