Have visited nearly all my usual local haunts over the past week but very little to go on about. No more doggy stories thank goodness and the paths have been very quiet so nothing to chunter about. In fact those folk I have bumped into here and there have been very chatty and amiable.
Seem to be a few Hobbies about, 3 today, 2, an adult and a juv. at Alvecote and one at Cliff pool Kingsbury. Also at Alvecote today were 3 Little Egret and a couple of Common terns and 50+ House Martins.On the Caldecote walk 2 Yellow wagtails were seen and on the Rothern's farm walk, Mancetter, there were 2 Ravens. 2 Ravens were also seen beyond the Orchard at Alvecote but the Redstart proved extremely elusive. An Avocet at Brandon Marsh was a good Warks. year bird on the same pool as 4 Green Sandpipers and a single Common Sandpiper was seen at Shustoke on the piles of algae and weed. Talking of weed I spent almost as much time today pulling up Himalayan Balsam as I did Birding. A drop in the ocean I know but I suppose every bit helps. So that's about it for the past few days, still struggling with the new phone so tweeting is on hold but I'm hopeful of getting all coms back in full working order shortly.
Posted by bob duckhouse at 12:02 No comments:

Now call me a grumpy old man but some things do annoy me. Yesterday it was fly-tipping on my Caldecote walk and today dog owners in the countryside. Before I go any further I should say some dog owners, probably a very small proportion but today I saw at best a very silly dog owner. The person who will be sexless released the two large dogs on entering the field I was in checking for migrants. The field is used as pasture for both Sheep and cattle. Not surprisingly on seeing the small herd of curious Bullocks the dogs or at least one of them went crazy. The shouts of 'Jack' rang out, the shouts ranged from appeals to the dogs better nature in a pleading tone to threatening screams of panic induced hysteria. I couldn't see what the dogs were doing but I did see the rather large person climb a barbed wire fence into the next crop field presumably in pursuit of Jack. The Bullocks looked on in apparent amazement or perhaps it was indifference anyway they just looked on as cows do. Luckily for me I'd pretty much finished my mini patch walk. If I was just starting then I really would have been grumpy. Nothing to report on the bird front except Chiffchaff and a single juvenile Bullfinch.
Earlier in the day,before the rain, I went to Alvecote. There was a Little ringed Plover on Mill pool and a Redstart in hedges on the Staffordshire side. 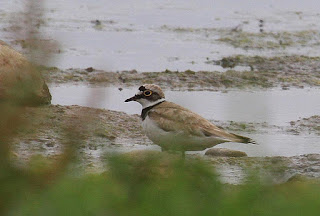 Thursday 15th July 2015
Working on the theory that everyone that wanted/needed to see the 1s Red footed Falcon at Tunstall, Staffs. had been already been, and the apparent shinanigans at the site would be history. I took myself off for what I later realised was a West Midlands 'tick'. My Sat. Nav. did its job I duly arrived on site to park 80 yards from the Falcon perched on a wire above the horse paddock. I joined about 40 other folk the majority of which had cameras, some telescopes and some just bins. There was plenty of room along the fence and everyone was getting excellent views. It soon become apparent that the Falcon was attracted to its lookout by locusts which could be seen hopping in the grass a few metres from the fence and the expectant onlookers. It wasnt too long before the Red foot dropped down to take a locust giving even better opportunities to view or photograph the bird. It was an opportunity too good to miss so I took a few shots as well. In a way it was satisfying being so close to the bird but there was also something unnatural and slightly unreal about the bird being lured down for the convenience of the masses a bit like feeding time at the zoo.
There was also a Black Redstart just inside the Colliery gates which also 'showed well'. 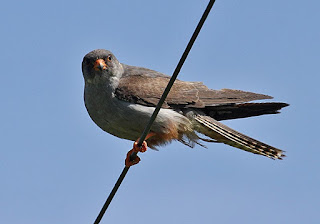 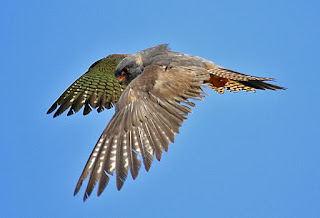 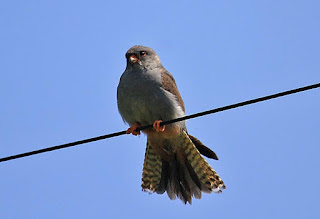 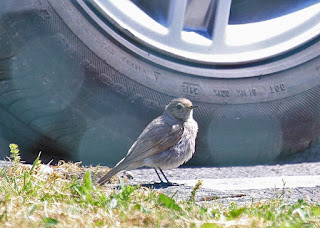 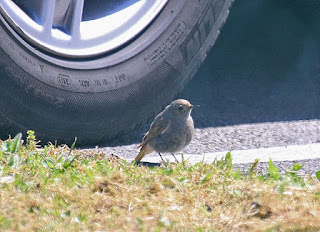 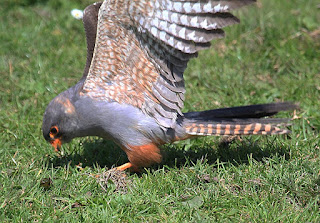 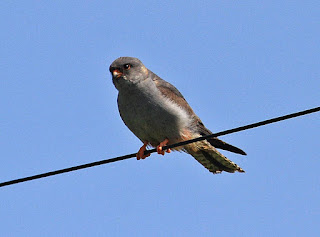 Wednesday 8th July 2015
Typical summer fare. After the excitement of the White winged Black Tern things have quietened down. Highlight of last week was a small flock of Common Crossbill in Bentley Woods. 6 of the group were very mobile but one male perched up but of course no camera. Green Sandpipers are turning up and I had a colourful Black tailed Godwit at Brandon Marsh today. Alvecote produced good views of Lesser Whitethroat but visits to Shustoke, Caldecote, Coton and the various lakes in KW Park have produced nothing out of the ordinary. 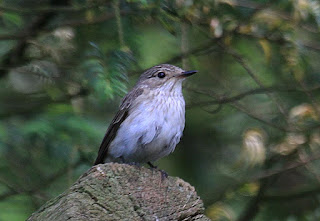 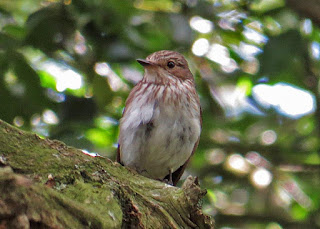 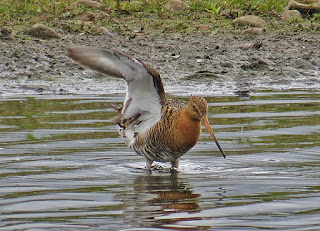 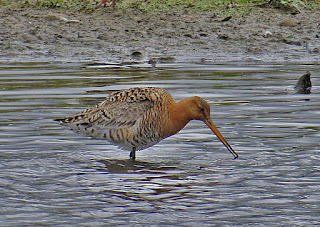 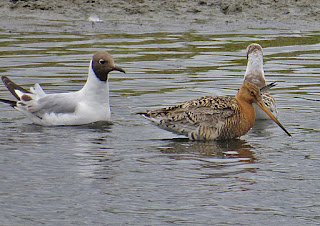 A selection of shots of the White winged Black Tern that turned up in the central area of RSPB Middleton Lakes: 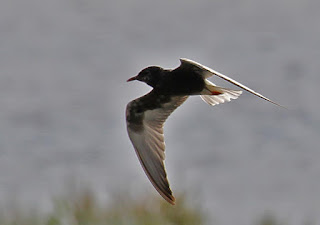 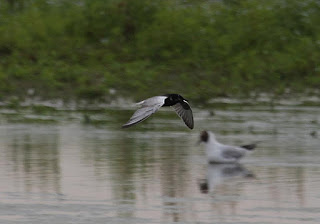 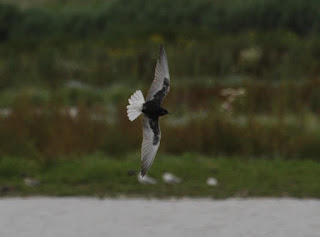 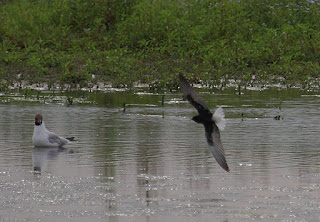 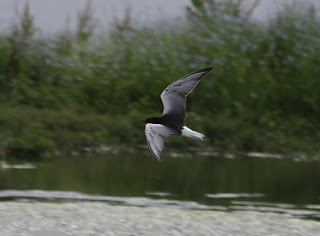 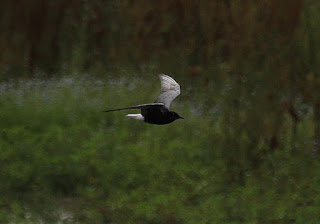 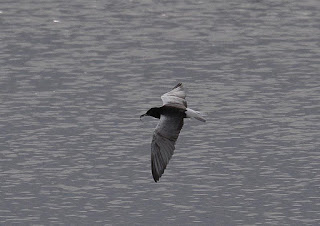 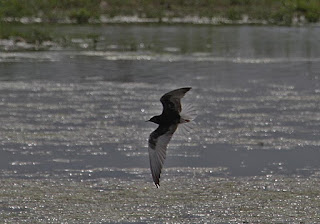 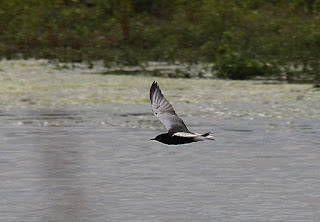 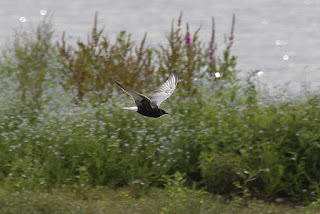 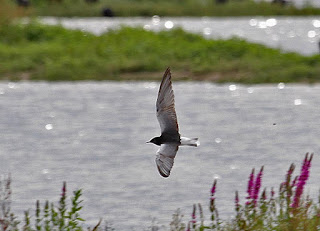 There were also 17 Black tailed Godwits on site.