Saturday 16th November 2013
Enjoyed a day in South Wales in the company of Julian Allen on Saturday. Our aim was to try and see an Orphean warbler which had taken up residence in the garden near Dale in Pembrokeshire. Having missed the previous record in Hartlepool it was great to have another chance so soon. In pessimistic mood I had envisaged a long wait to see the bird with a chaotic queue a mile long. I couldnt have been more wrong. The whole event was organised with almost military precision by the local birders. The bird played its part too giving reasonable views as we waited the queue. The warbler showed much better though from the garden feeding in the Apple trees. I wished I'd taken my camera but the priority was to see the bird.
In due course we moved on to look for Lapland Bunting on a disused airfield just up the road. No luck despite a good search but it was good to stretch our legs after the long drive. We had more luck with the local Choughs, getting great views on the cliffs at Martin's Haven. 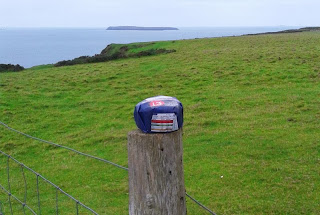 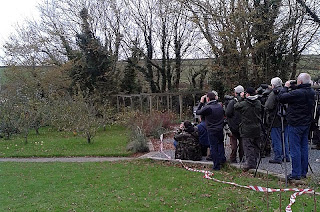 Orphean warbler, viewed in the garden by kind permission of the owners.
Posted by bob duckhouse at 01:48