October birding has been unusually local for me this year following the annual trip to the Shetland Isles. Attention  focussed on the local hills and a rather special day at Draycote Water. Daily visits to the Mancetter Quarry hill had produced very little apart from an apparent increase in numbers of Woodpigeons, Chaffinches, Goldfinches and Meadow Pipits.
However reports of local sightings of Hawfinches, a little further along the ridge at Hartshill Hayes caused a relocation. A different strategy was called for as it became apparent that a major eruption of Hawfinches was underway. The following days saw frequent 'vis. migging' sessions from the favoured vantage point on the edge of the Hayes, which gave great views to the east. Flocks of Thrushes and Finches, mainly Redwing and Chaffinch but also smaller numbers of Skylark, Siskin, Fieldfare with the odd Brambling and Meadow pipit picked out by Warks. Bird Obs. whose hearing and knowledge of bird calls is considerably better than mine. Sightings of incoming Hawfinches though did not occur until the 5th attempt when 5 birds were seen.
News that a Razorbill was at Draycote water had me heading off a little further afield. The bird looked in good enough condition as it swam and dived around the fishing boats and pontoons but the half closed eyes suggested the bird was on its last legs.The bird was found dead the next day. The extremely rare visitor to the Midlands and the supporting cast of Grey Phalarope and Shag were well appreciated by the gathering of notable Birders from Warwickshire and the West Mids and at least a couple from the East Mids. 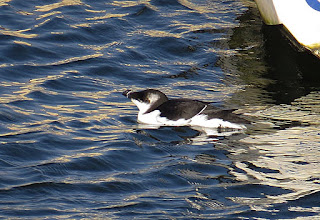 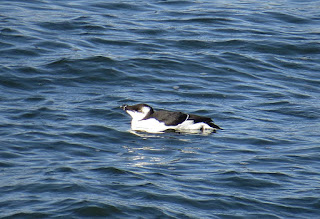 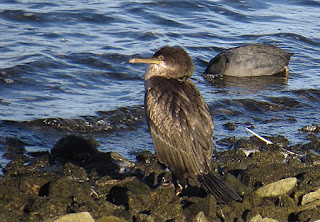 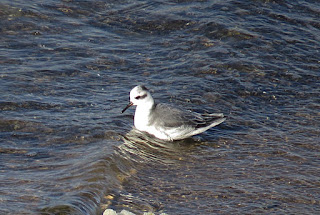