Monday 8th July 2013
Saw a Dunnock in the garden today use a feeding technique I've never seen before. The bird appeared to deliberately fly into a dwarf Rose plant and then feed on the Aphids it had dislodged. At least thats what appeared to happen. The Dunnock may have accidentally flown into the Rose and just taken advantage of the Aphids on the path which resulted. Certainly the action was not repeated to my knowledge, but the fact that bird was immediately aware that the food was available and began feeding as soon as it landed makes me wonder if it was a deliberate ploy. Has anyone else witnessed similar behaviour? 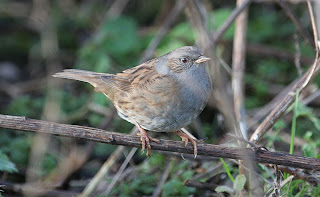 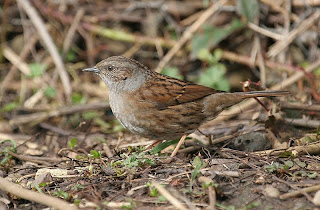 Dunnock
Posted by bob duckhouse at 14:49