4th December 2013
Took a trip up the M6 with Dave Abbott and Steve Lister to hopefully see a Baikal Teal which had taken up residence in the creeks and channels of the Salt marsh just north of Southport near the Marshside Nature reserve. We joined 20 or so other birders on the flood relief bank and started working through the Wigeon, Teal and Mallards in the main channel. No sign. The bird had been seen earlier but there was no sign now. A Great White Egret could be seen in the distance along with flocks of Pink footed Geese but with a fresh head wind and eyes watering, finding the Teal would be more difficult. It wasn't too long though before the bird was relocated amongst a large flock of Wigeon. It was quite distant and would require a 20 minute walk to get decent views.The extra walk was well worth it though, although the bird did spend much of its time asleep on a grassy bank. Whatever the decisions on the likely origins of the bird it was a smart looking duck when it did wake up and show itself properly. 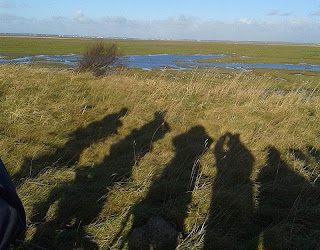