A day at Ladywalk Nature reserve

Another day, another attempt at seeing a Warwickshire Bittern in the new year. Again Ladywalk was the venue.It was cold and as the minutes became hours and the hours became ...err, it got colder. Entertainment was limited. The backend of a Water Rail, a brief view of a Kingfisher, distant views of a Peregrine and a Raven and a glimpse of a Cetti's warbler. People left, people arrived, people left and came back. A good deal more action in the hide than in the Reedbed. I set myself a time limit which came and went. I scanned the edges of the reeds for the nth time. What's that? a pointy thing that wasn't there before. That was it, the top alf of a Bittern at last. Quite distant but a Bittern.
And then Steve C. gets a call. 'Long eared Owl on post near the hide at Whitacre Heath'. 'Well blow me down' We decided to investigate and hurried round to Bittern hide where we could see across the river to Whitacre. True enough the Owl was sitting on a fence post but under closer scrutiny in the scope was clearly a Short eared Owl. 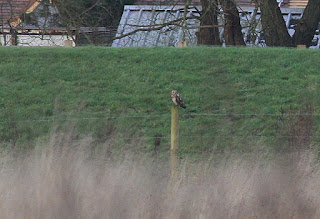 A rather distant Short eared Owl 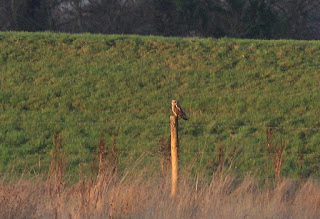