The Purple Swamphen at Minsmere rspb

Well August has begun well with a trip to Minsmere in the sun yesterday and Draycote Water in the rain today. Both trips were very enjoyable. I travelled to Suffolk with John H. John B.and Steve N. We went to have a look at the Purple Swamphen which had taken up residence on one of the smaller Reed fringed pools of the reserve. We travelled overnight arriving at daybreak and joined a small group of birders to make our way to the pool. As the light came up the group started scanning the reeds, and it wasn't to long before we got our first sighting as the bird worked its way along the bases of the reeds showing very well at times.I was beginning to rue the fact I had decided to leave my camera at home for once. I'm indebted to Steve Nuttall for e'mailing me some of his excellent images.
We made the most of, which for me was a rare visit to Minsmere RSPB. We saw part of the rich variety of species to be seen there including : Bearded Tit, Cetti's warbler,Cuckoo, Spotted Redshank, Ruff, Little Stint, Greenshank, Dunlin, Curlew and Black tailed Godwit. 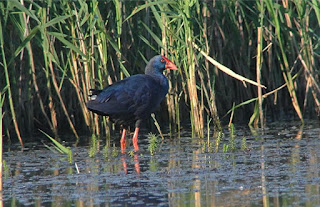 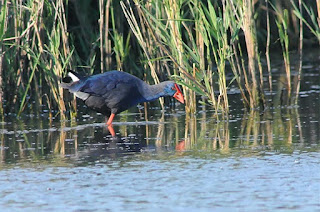 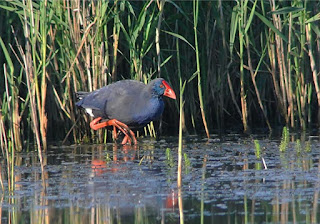 Purple Swamphen - all photos courtesy of Steve Nuttall
Many thanks to John Boden for driving.
Posted by bob duckhouse at 08:45