Thursday 2nd January 2014
Lovely day for a leisurely birding stroll around Draycote Water. Unfortunately limited time meant I had to keep on the move if I was going to see all the 'target' birds on offer. Apologies, therefore, to the various folk I met for not having a longer chat. Started off walking to Toft bay. Picking up a drake Smew, an obliging Great northern Diver and a somewhat distant Long tailed Duck and a couple of Red breasted Mergansers on the way. 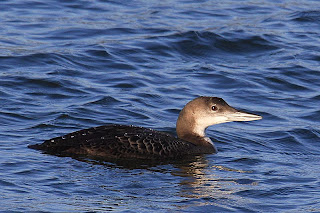 Great Northern Diver, Draycote Water
Walking back to the visitors centre, around Rainbow corner to the Valve tower I got much better views of the 2 Red breasted Mergansers. Tree sparrows and a Grey Wagtail were also seen but that was about it before I had to be making tracks.

Friday 3rd January 2014
Pretty unspectacular morning in the Tame valley. A walk around Shustoke in a strong wind was quiet, as was a visit to Ladywalk. 4 Lesser Redpolls were on the feeders but the hoped for kickstart to the now annual County yearlist never happened.
Posted by bob duckhouse at 01:20