Monday 5th October 2015
Well it was that time of the year again, the much anticipated visit to the Shetland Isles. In company with Julian Allen, Tom Perrins, Pete Forbes and Keith Wimbush we settled in to our accommodation in Lerwick. Not much of a view but we did have Sycamores in the front and back gardens which were regularly visited by both Lesser Whitethroat and Yellow browed warbler throughout the week. 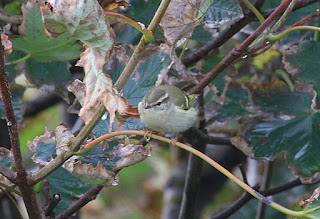 Large numbers of Yellow broweds were seen throughout the week at almost every location with a suitable Sycamore tree/bush.
The weather was varied, from very pleasant sunshine to strong winds and squalls. Time in the field was divided between checking out likely habitat for ourselves and following up information of new birds. The week started on a high note with a number of 'good' 'Shetland birds' soon  'in the bag'. Lanceolated warbler was undoutedly the bird of the day with Blyth's reed warbler and American Golden plover good back up birds. The day was slightly spoiled though by England losing to Wales in the World Cup.
Day 3 saw us heading up to Unst which turned out to be an unwise decision. Despite the beauty of the landscape we missed out on the Pallid Harrier and the Arctic warbler. A couple of Barred warblers seemed scant reward. 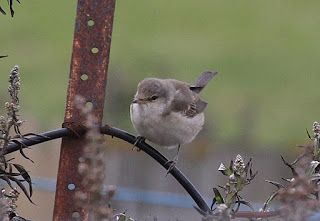 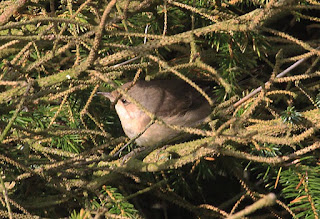 Barred warbler
Even more so when a Grey checked Thrush made a one day appearance on the Mainland.
Day 5 was notable for a Pechora Pipit at Norby and a sprained ankle at Quendale. A Bluethroat at Deregarth also showed well. 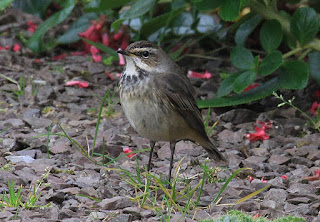 Bluethroat
Day 6 was notable for an Arctic warbler at Gott, Fish and Chips (again) and 2 excellent Rugby matches
Bird of the day on day 7 was a toss up between a very showy Red breasted Flycatcher at Hestingott and a confiding male Bluethroat at Quendale quarry. 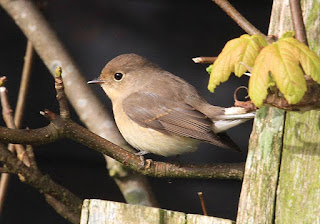 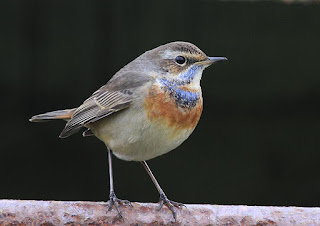 So, my recollections of a very enjoyable week on the Shetland Isles. Good company, and good birds.Some of the places have been omitted because I cant remember them but you get the general idea. An assortment of other images will appear in the next post including more shots of the Bluethroat.
Posted by bob duckhouse at 06:59