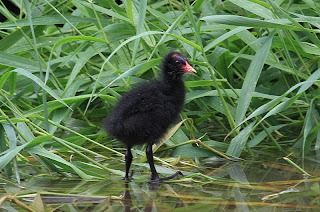 Moorhen
Those of you who were paying attention will have realised I was a da short yesterday, but whats a da among friends I say. Actually there isnt a single da in the Lennon/ Mc Cartney lyrics. Got mixed up with the Crystals hit. Didnt do alot today I'm afraid, just a quick look around a bit of the Coventry canal and the adjacent bushes near the Anchor pub. Just a single Redstart but several Common Whitethroat and a female Blackcap still around.
Posted by bob duckhouse at 11:03