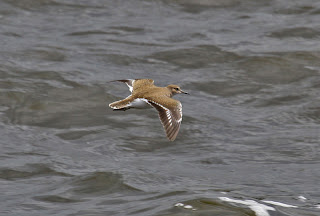 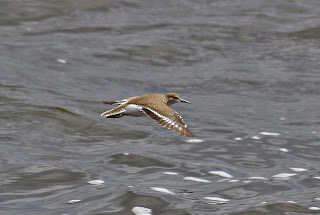 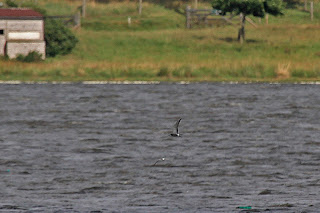 Black Tern﻿
When I say 'meets' I dont mean they actually met, its just a clever way of linking the two most memorable things in a days birding at Blithfield Res. - but first the birds. Scanning from the causeway car park a flock of terns could be seen at some distance. A least 4 adult Black terns and perhaps 20 juvs. There were also several juv. Common/ Arctic terns. An Osprey was seen briefly high over the woodland and at least 7 Common Sandpiper along the causeway. The lonely figure of a real Birder could also be seen. Seeking solitude from the casual 'tourist' birders like myself. The real birder, complete with weather battered baseball cap, up at the crack of dawn stubble and safari jacket scanned the shorelines in his endless quest to find birds. Good luck real birder, good on ya.
Having checked out Tad bay and Beech Tree point it was time for me to to move on. I needed some supplies and a cup of Tea, so ASDA at Tamworth was a convenient stopping off point. It was there I renewed my acquaintance with Mrs Overall. She had been 'promoted' to working on the till. OK I dont like queueing at any time but it is expected in Supermarkets and I wasn't in a particular hurry. Mrs Overall was doing her best but took an age to see to the 2 customers in front of me. I think the problem was a 5p which had got lost. The search involved the relocation of the till and well, enough was enough. I left the queue and left Mrs Overall to her search.
Posted by bob duckhouse at 02:11