2nd -5th October 2013
Over the next couple of days the weather deteriorated with very strong southerly winds and heavy rain at times. The team concentrated on the more sheltered spots on the Mainland but it was hard going. On Thursday we went for the Hudsonian Whimbrel which had been found near Mid Yell but with conflicting information on where and when it had been seen we drew a blank.
On Friday the winds eased although there was still heavy rain as we drove to Lerwick harbour with the main intention of photographing Black Guillemots. 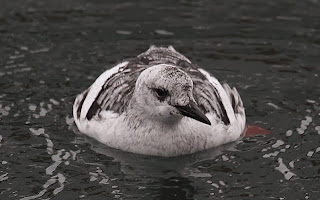 Black Guillemot, Lerwick harbour
We also saw a Velvet Scoter before heading back South again. I cant remember exactly where we were when the news broke but I can remember we weren't very far away and we jumped back into the car pretty smartish. A Thick-billed warbler had been identified at Geosetter. After some careful parking manouvres from Julian we joined the small group of birders already assembled on the roadside. The bird was in a crop field next to the road and extremely elusive. During the course of the next couple of hours the bird was seen to fly low over the crop field 3 times and perched briefly in the Willows alongside the burn just before dusk. Thick billed warbler is one of THE most sought after 'Shetland birds' and by good fortune the team was in the right place at the right time.
We visited the site next morning and eventually, in better light, got a good view of the bird in flight. News that another eastern goodie had been found filtered through the assembled group. There was an Eastern Olivaceous warbler in a garden at Hoswick. As the sun broke through on the trees and bushes at the back of the garden a number of warblers : Blackcap, Garden warbler, Yellow browed warbler, Chiffchaff and the Eastern Olivaceous warbler were seen. 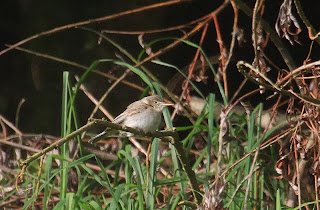 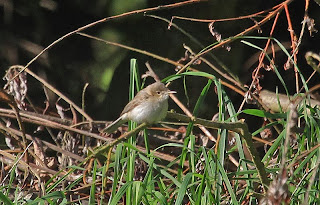 Eastern Olivaceous warbler
As if that wasn't enough, Shetland had another nice little surprise for us at Sumburgh in the form of a Greater Short-toed Lark which favoured a horse paddock next to the airfield. 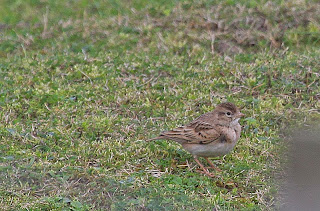