Myrtle warbler in the Sunshine

Tuesday 11th February 2014
A rare sight this year- the Sun, appeared as John H., John B., John T and myself headed North up the A1 to County Durham in the hope of seeing a Myrtle warbler. As we parked up on the outskirts of a housing estate in the village of High Shincliffe the sun was bright in the sky although it was still very cold. After a short walk we arrived 'on site' to find several birders focussed on an area of bushes and trees by the side of the road. They were giving directions. This was very encouraging and it wasnt long before we were following the various instructions. It was annoying to hear cameras clicking next to you when you hadnt seen the bird yourself. I suppose its only a matter of seconds before we did get our first sighting, it just seemed like a lot longer. Anyway there it was just the other side of the road feeding on a Coconut, partially obscured by bushes. Over the course of the next few hours we got much better views as the Myrtle warbler toured various parts of the estate before returning to the Coconut bushes. I deliberately hadnt taken my camera, I was beginning to wish I had as the bird showed higher in the trees as the day warmed. The number of birders steadily grew and most took a break from the warbler to go and see the 3 Waxwings just 400 yards or so up the road. It was also good to see a few Tree sparrows in nearby hedges. Many thanks to John H. for driving, a very enjoyable day. 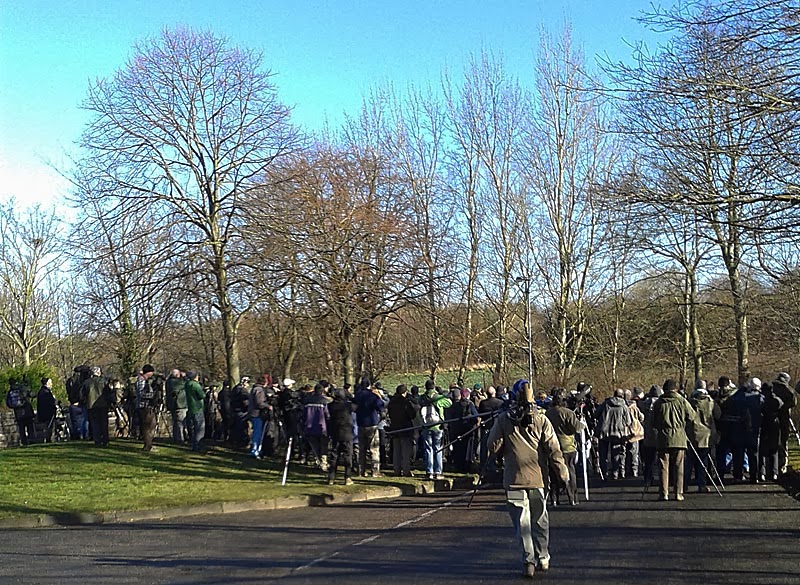