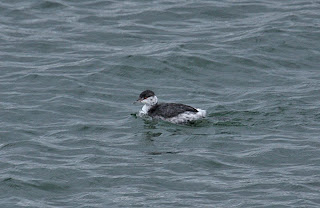 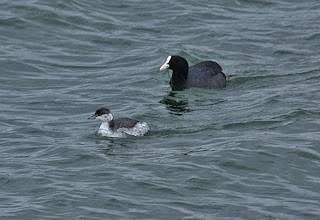 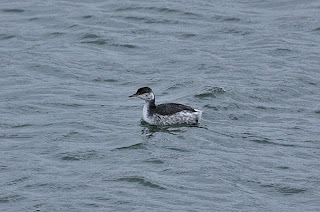 Firstly thanks to those people who recommended good websites on Bird calls. One was particularly useful, with the flight call I was looking for. I am now satisfied that what I saw yesterday was a group of birds which included Lapland Bunting.
Started the day at Alvecote but not much to report, good selection of Garden birds in the bushes between Mill pool and the railway line including a Chiffchaff. The Magic mushroom brigade were out and about, complete with Rainbow Tea cosy and sad attempts at growing facial hair.' Its a bummer...Aint found nuffin, man'.
Lunch at Orton on the Hill was definitely up market with black olives added to the vegetable Samosas and Hula Hoops. A feast, but not regards birds, the flocks of Skylarks and pipits were too far away to scrutinise properly. So what to do next? I pondered the next move but as the flavour of the last morsel of Hula Hoop faded a message from the pager sent be back to Draycote again. To hopefully see a Slavonian Grebe reported on Farborough Bank. Ur, what I really meant to say was off Farborough Bank.
Close inspection of the birds off Farborough bank revealed nothing out of the ordinary, as I scanned from Farborough spit I was beginning to have doubts. I had to walk half way down Toft bank to find the Slavonian Grebe(176), a rather scruffy individual but a Slavonian Grebe non the less.
Posted by bob duckhouse at 09:37