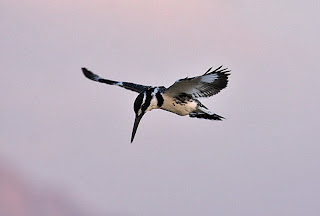 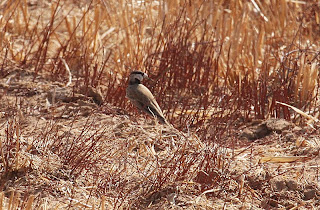 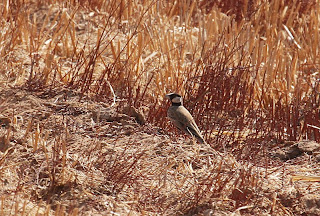 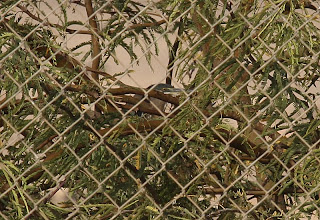 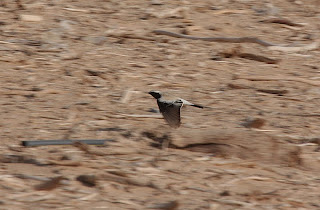 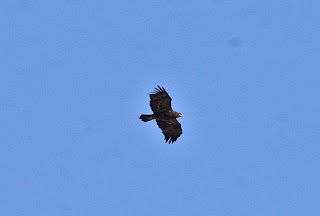 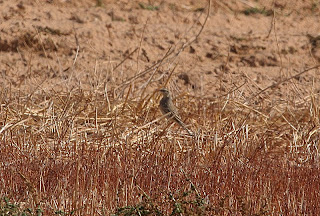 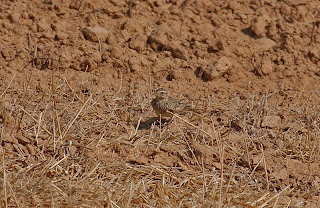 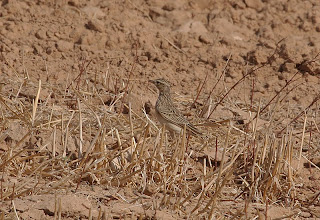 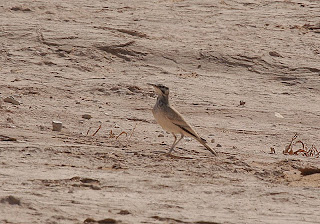 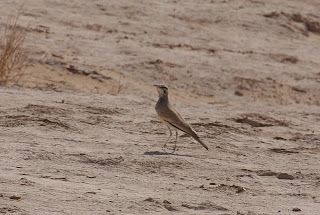 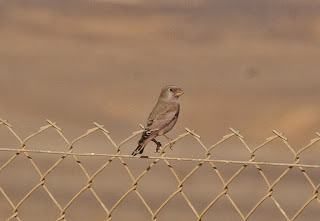 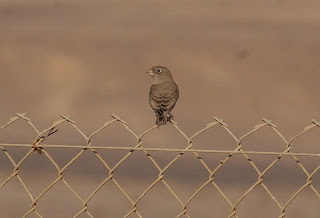 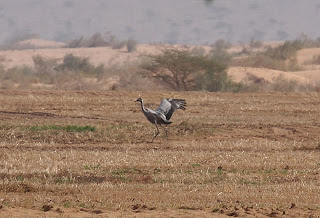 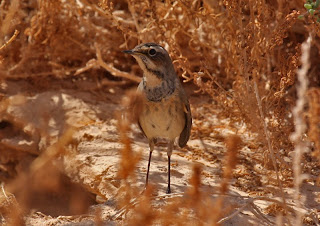 Bluethroat
Day 3
I dont want to dwell on the negative aspects of this tour because we all saw a great many wonderful birds and had a great time. But, and I shall say this only once, the hotel in Eilat was apalling. Despite the best efforts of James and Nigel we spent 2 nights in what one member of the Warwickshire 5 described as conditions worse than a Bail hostel.
Our first location on day 3 was Yotvata, an area of agricultural fields adjacent to sand dunes and desert. The fields, in various stages of cultivation were well irrigated and attracted a range of bird species but particularly Larks. One Lark in particular, a Black crowned Sparrow Lark, had been seen in the fields the day before so the search for this rare visitor to Israel was on. As we worked our way around the fields there were large numbers of birds on the ground including Desert Wheatear, Tawny Pipit, Bluethroat, Common Crane, Steppe Eagle, Hoopoe Lark, a flock of Thick billed Lark, Richard's pipit and cracking views of Oriental Skylark. Typically the Black crowned Sparrow lark was in the last patch of ground we had to cover but it was well worth waiting for with very distinctive plummage for a lark.
We moved on to Wadi Quetura to begin the search for Striated Scops Owl, the first of many such Wadi's we were to explore in vain. We were more successful at Shizzafon Sewage works with some good birds including a Striated Heron which flew in while we were there. Other species included Dunlin, Little Stint, Water pipit and Trumpeter Finch. A quick check of the North beach in Eilat produced White eyed Gull, Pied Kingfisher, Little and Great White Egrets before we moved on to Eilat north Sewage works just before dusk. As we made ourselves comfy on the rocky banks of the pool a number of species could be seen in the far corner. Spoonbill, White Pelican, Night Heron, Pintail and Caspian Tern. As we waited in the gloom 3 Lichtenstein's Sandgrouse landed just in front of us. Amazing, simply amazing and a great end to the day.
Posted by bob duckhouse at 07:53