Meanwhile back in Warwickshire 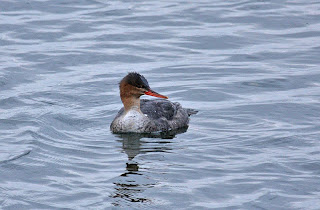 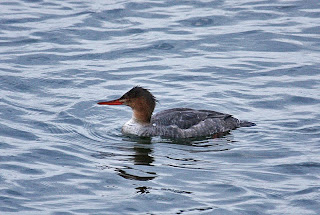 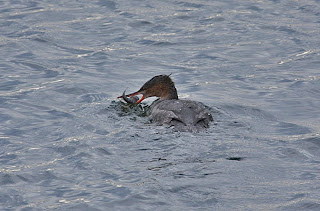 News that a Red breasted Merganser had turned at Shustoke Res. only slightly damped the euphoria of yet more W.P. ticks in Israel. The R B Merg is a very infrequent visitor to Warks. and a great bird for the County year listers. So news from PPGNS or Tom Perrins' Global News services, that a Merganser had been found at Shustoke deflected the attention of the Warwickshire Five from the problems with the accommodation in Eilat. Both Hotel and the Merganser were soon forgotten though after a great day at Yotvata the following day and James coming up with up a Brown Booby off the North beach in Eilat. All the books suggest Brown Booby is a frequent visitor to Eilat but you have still got to be there at the right time to see them. Theres something about Boobies, I cant quite put my finger on it but when you see them, free, almost floating over the water or perched up proud, its a sight to remember. You never forget your first sight of a Booby.
As the pace of the tour increased little did we think the Merganser would still be at Shustoke a week later. But it was. Brown Boobies AND Red breasted Merganser, outstanding !
Posted by bob duckhouse at 14:45