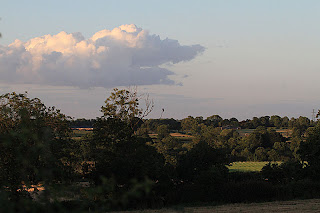 Common Buzzard, Higham on the Hill, Leics.
A walk round the local patch near Caldecote got off to a good start with a pair of Grey wagtails on the canal section. The bushes were also productive with the first Common Redstart, a juvenile, to be seen on 'Autumn' passage. A presumed Reed warbler and several phylloscs were seen in the same area as well as a third Grey wagtail. There seemed to be Green Woodpecker everywhere, so some species at least have had a decent breeding season. I went up to Higham on the Hill yesterday in the evening with a view to photographing a dramatic sunset but the only drama was a serious discussion with a group of horses about why they shouldn't eat me. In the end the only thing worth photographing was a fox which happened along. 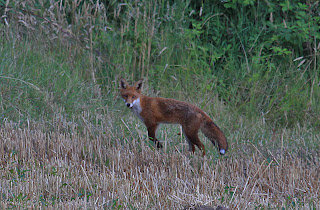