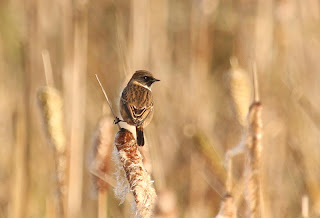 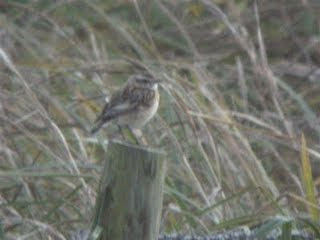 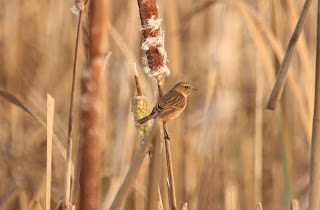 Female Stonechat - Fishers Mill, Warks.
Wednesday 9th December 2009
A rather clumsy attempt at a comparison between the identification features of winter female Stonechat and Whinchat at distance. Main features just visible in the photos: White at base of tail in Whinchat, more striking cap effect on Whinchat and broader more distinct supercillium on Whinchat particularly behind eye.
When news broke that a Whinchat had been seen at Tameside nature reserve, between Fazeley and Tamworth I was somewhat sceptical. Whinchat in December? unheard of, at least by me. So I dismissed it as a misidentified 1w Stonechat. Oh ye of little faith ! When confirmation came through from Steve Haynes and Chris Cook that it was indeed a Whinchat I just had to see for myself. What was one of the most surprising arrivals in the Tame valley in 2009 showed well in the scope off and on as it spent much of its time foraging in the wet vegetation. Not far away on the edge of the main pool were also 2 Chiffchaff.
I moved on to the Fishers Mill area where I was interested in a pair of Stonechat which allowed a handy comparison with the Whinchat. The only other bird of note was a single Little Egret flying towards the Water Park.
Posted by bob duckhouse at 00:32