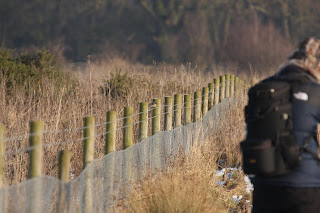 Tut !
Wednesday 30th December 2009
The weather matches my mood this morning. Dark and Gloomy. Villa losing to Liverpool of all teams in the last minute Arghh ! This was tempered a little bit by the England Cricketers destroying South Africa but it was a game we needed to win etc, etc.

Got out of the house yesterday to stretch my legs but its going to take more than a few strolls round Fisher's Mill to use up the calories I've taken in over the last few days. Not much doing on the birding front. I had hoped the Short eared Owl might be hunting mid-afternoon but no luck. Its difficult to recall much of note: a couple of Song Thrushes, a large swim of Coots at Broomey Croft with Gadwall. Several gatherings of Teal on the ice free bits of water on the smaller pools of the Water Park. No Wigeon. I checked the large flocks of Canada geese and Greylags and found Canada geese and Greylags. A couple of G. S. Woodpeckers flew over the canal.

Now about this size thing. You will recall I went to see a Siberian Stonechat the other day and I also rambled on about the folly of becoming a Bird Photographer, well if you put the two together it reminded me of the fact I was tutted at at Bevercotes. I've never been tutted at before, sworn at loads of times but never tutted at. It was a silent tut but it was the slow turn of the head and the brief stare that said f... off this is my bird.

What happened was this, there were 5 other birders on site when I arrived at Bevercotes Wood including one guy with a camera and a lens the size of a gun turret on a Battleship. The group were dispersed to scan the area both sides of the path. The lens had positioned itself along a narrow path at the side of a large fenced off area. The lens was clearly on to something. Seeing this an opportunity for a few Blog shots I approached and showing due deferrence to the enormous lens kept well back. I could see the Stonechat on the fence about 4 inches in front of the lens. The photographer was filling his boots. I took a record shot - then came the tut. The audacity, me with my little 100-400 IS daring to have a go. The bird flew, clearly due to the fact that I wasn't wearing a camouflaged hat with attached earmuffs and nothing at all to do with the fact the it got tired of having such an enormous lens waved at it. Anyway I've learnt my lesson, the bigger you are the more rights you've got to dominate the action and block paths with equally big Tripods. I'll have to continue to live off scraps or devise yet more cunning plans based on experience, field skills and luck.
Posted by bob duckhouse at 02:12