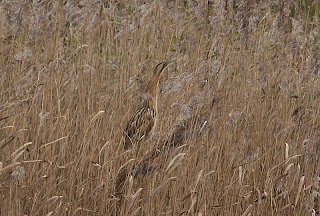 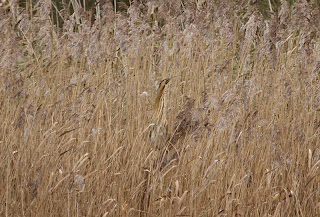 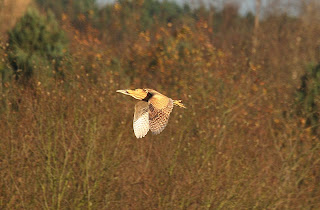 Friday 4th December 2009
Today I shall be doing Bitterns. The question is are we talking about one, two or perhaps even 3 Bitterns at Brandon Marsh, near Coventry? There are certainly 2, and on today's evidence theres a strong possibility of 3. Having not been to Brandon on Wednesday as I'd intended it became a priority on such a fine day. So after walking the woodland paths I headed for East Marsh and then Carlton Hide. A couple of Cetti's warblers were calling either side of the path on the way to Carlton but the scene from the hide was one of tranquility. A few Gadwall on the water, a couple of gulls and crows flying over and some distant sweaters on the Golf course provided the only signs of life.
Bittern watching can be tedious in such circumstances. You dont know how long to give it, empty Reed beds can only provide so much fun. Even fantasizing about Bearded tit or any other kind of tit can only produce limited relief. Trouble is if you've invested an hour waited on the off chance the time would be wasted if the Bittern appeared 5 minutes after you had departed.
Any road up after about an hour at exactly 11.00 am the Bittern showed briefly as it flew across Newlands. I did managed to get a few rather distant images. Knowing where the bird now was it was worth spending a bit more time in case the bird emerged again, but as it got colder and I got hungrier and as the bird showed no inclination to show itself it was time for coffee and Pork pie. The coffee in the restaurant at the centre was disappointing at £1.45 a go you'd expect it to be at least warm. The Pork pie complete with Colman's mustard was much more satisfying.

Re-energised I was eager for more and visited the parts of the reserve I hadn't been to earlier. An inspired decision. In one hide I found an enthusiastic young women who thought she may have seen a Bittern earlier but had definitely seen a Kingfisher. As I opened the hide window 2 Water rails flew up from next to the hide and shortly after that my new found friend spotted a Bittern swimming across the pool. Over the next 40 minutes we watched the Bittern as it climbed the reeds, stretched, and look around before finally flying deeper into cover. Brilliant. From the earlier sightings the lady had and from entries in the log it looks like there may well be 3 Bitterns in residence at Brandon Marsh at the moment.
Posted by bob duckhouse at 07:52