Friday 25th October 2014
Travelled down to Cornwall with John Terry to hopefully see one of my 'most wanted' birds. We drove down to Exeter and waited for news.When news that the bird was still there and still alive we got moving again. As on many twitches we had a few delays. Driving through the centre of Penzance is not a good idea at 10.00am on a Friday. Several agricultural vehicles posed challenges to our progress and to top it all we had to wait for an entire herd of cows to make their way across our path. As we approached Porthwarra the low cloud seemed to get even lower reducing visability to a few yards.Not an encouraging sign. We parked up and prepared ourself for a hike onto the moors. As we set off a happy group of West Mids birders reached the car park, flushed with success and the look that says - seen it, in the bag. We trudged on wishing we had set off 1/2 an hour earlier. The drizzle continued as we reached the point where it was last seen. An area of Willow scrub and Bracken. Now and again the cloud lifted and visability improved but still no sign of the Cuckoo. There were now only a handfull of birders on site, surrounding the area it was thought to be in. After over an hour a couple of birders on the far side seemed focussed on something, and then the wave.They'd got it. After a lung bursting walk/run I was in position. Directions were being given but it seemed an age, but probably only a matter of seconds before I was on the bird as it sat on a wall giving great views. For once I hadn't got my camera with me which was turning out to be a huge mistake. I checked that John was getting a good view too but as the bird lingered on the wall everyone was content with the view they were getting at relatively close range. 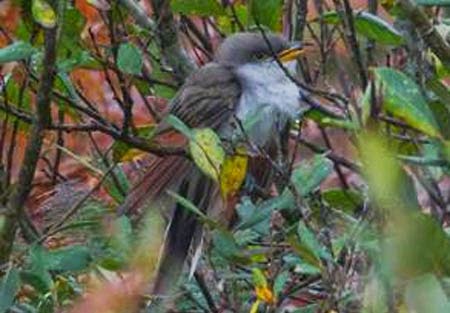