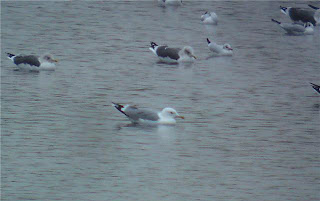 A typical November day damp and dreary but a walk was called for. It started at Mancetter, bridge 36 on the Coventry canal along the towpath to bridge 23 at Judkins quarry Nuneaton and back. Getting on for 10 miles I reckoned. Not quite as spectacular as Venice but a pleasant walk even on such a dull day. Canals and their towpaths can be useful to access areas with no public rights of way but the downside is that the view of the surrounding habitat is often restricted by hedges and banks and the path is all on one level.
People who live, or spend a lot of time on barges at moorings quite often put out feeders for the birds and at one such mooring there was quite a little feeding station which attracted Tree Sparrows as well as the usual 'garden birds'. I counted a nice little flock of 7 Tree Sparrows. The rest of the route produced little of great interest. The only flocks apart from Corvids, Woodpigeons and Goldfinches were c12 Pied Wagtails and c20 Meadow pipits in a field of winter wheat next to the Windmill Hill Marina. Jays continued to busy themselves preparing for winter but there were few thrushes except a single Yew tree near Hartshill in which Redwing, Mistle and Song Thrush were feeding.
Being close to home I went back for refreshments before setting off again for Coton for the Gull roost. Alan Dean and Mark Priest were already in the hide and it wasnt long before we were joined by John Harris. At 3.30pm Alan spotted the adult Caspian Gull (172) which he had seen earlier in the day at Dosthill. Although at the back of the flock the gull showed well in the 'scope. Alan described all the features of Caspian gull which were clearly visible and I felt more confident I would be able to id the bird for myself given similar views. At about 4.00pm the Caspian gull flew off to the North east and did not return by dusk. Shortly afterwards an adult Yellow legged gull dropped in to what was now a small roost. It was great to compare the features I had just seen on the Caspian gull. I'd like to think I was at last getting to grips with Gull ID but maybe I'll just keep on struggling and hope that theres somebody around who really knows what they are talking about.
For further analysis of the Coton Caspian Gull see Alan Dean's excellent website :
http://www.deanar.btinternet.co.uk/wmgulls/CaspG/ad111109.htm
Posted by bob duckhouse at 10:03