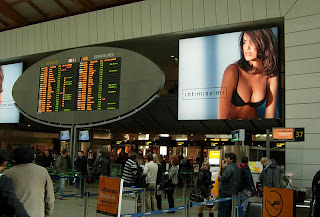 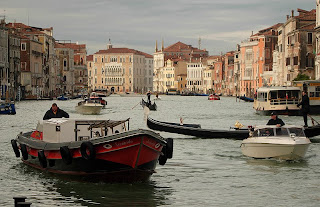 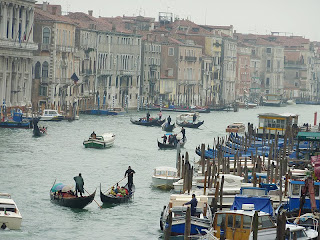 Jan and I teamed up with Gail and Ciaran in Somerset to travel to Venice from Bristol for the flight to Venice's Marco Polo airport. The water bus from the Airport took us across the lagoon to the Rialto bridge via the Grand Canal, the main thoroughfare through the city. The scene beyond the Rialto bridge was my wow moment of the trip as the canal, flanked by impressive buildings was alive with activity with boats of every description plying their trades. Our hotel was small but comfortable and ideally situated between St Marks square and the Rialto bridge. The old city with its canals, bridges, narrow streets and medieval buildings was all around us. Even off season in November the streets were busy with tourists mainly Japanese and French. The street sellers were doing a brisk trade in umbrellas as the heavens opened on the Tuesday of our visit and we took to the board walks as a high tide meant flooding in several ares including St Mark's square. It all added to the uniqueness of the place as we did the touristy bit.

Eating out was very expensive and I thought value for money was hard to find. It was great fun nonetheless, despite the weather. Quote of the week was probably ' the front of the church is round the back '
Posted by bob duckhouse at 13:46