Quiz of the Day 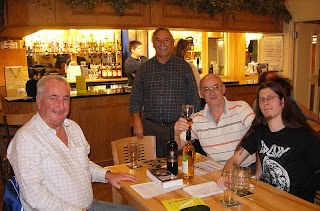 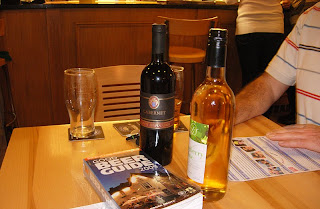 It hadn't been a bad weekend but it hadn't been a particularly good one either - Birding had been very limited and the Sport from an English perspective had been quite frankly rubbish, second rate, depressing. The Rugby was most dissappointing and thats being polite. Scared to pass the ball, aimless negative kicking, why bother playing if players are too scared to express themselves and have a go.

So there was one last chance to save the weekend. The Church End Brewery Quiz. Team Thursday night had been forced into a late change in personel, but undaunted we went through a vigorous warm up routine with a pre quiz pint of Vicar's Ruin. The team got off to a cracking start with full marks on the first round, confidence was high as questionmaster Al tested us to the full over the next couple of rounds. Despite a couple of indifferent rounds the team: Mike, JY, Soon to be Father Ben and myself took the positives out of the first half and had another pint. We were gelling well as a team with everyone contributing. We were playing without fear, looking round the room the other teams were putting on a front but we knew we only had to keep it going and stay positive to come at least fifth. As the second half moved on a couple of inspired answers gave us the momentum to close out the match in style. Cracks were beginning to show in our opponents resolve. Tell tale unshceduled comfort breaks, frequent requests to repeat questions. We'd got em rattled. Despite our lack of previous form we were starting to look like favourites. As Jan toted up the final scores we knew it was going to be close. It was like a Penalty shoot out, actually it was nothing like a penalty shoot out but we knew we could look each other in the eye and know that we'd given it our best shot, we could hold our heads high knowing that the glorious traditions of the Thursday club had been upheld. Am I going on ? Anyway we came second by one point and won a little prize which we'll drink another day.
Thanks to Al and Jan for organising the evening
Posted by bob duckhouse at 02:59