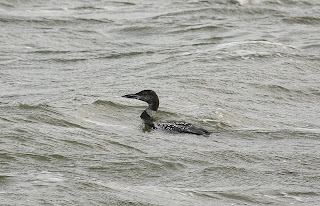 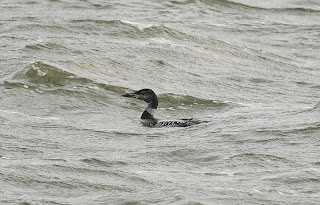 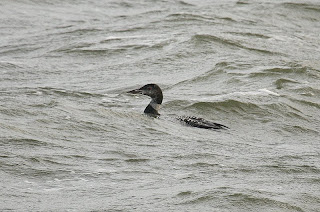 Thursday 19th November 2009
With such a sustained period of South westerly winds there had to be a chance of a sea bird being forced overland and seeking rest on a Midland reservoir. Both Draycote and Shustoke reservoirs had good records in this respect, living half way between the two, which one should I go for? I set off for Draycote, the Green winged Teal was in its regular place in Toft bay but there was little else new in as far as I could see. I'd just bought a coffee when I picked up a message saying there was a Great northern Diver at Shustoke reservoir, followed shortly afterwards by another message saying that there were indeed 2 Great northern Divers at Shustoke. At Draycote you almost expect to find a Great northern Diver in the winter months but in North Warwickshire they are a rare occurence. The birds found jointly by Lee Johnson, Steve Haynes and Brian Kington constituted one of very few records for this site. After finishing my coffee with indecent haste I said farewell to Bob Hazel and Richard Mays who was still seething that he had not had any info about the reported Pomerine Skua the previous day, and headed North.
Most of the usual suspects were already in position when I reached Shustoke. It soon became apparent that the Divers were spending most of their time under water and only surfacing briefly. I managed to get brief views of both birds from the car park area but decided to walk round the res for a closer look. As usual I seemed to be accompanied by a continual stream of untethered dogs. The birds remained largely underwater and mobile but I managed to get much better views of the adult bird. It was just starting to moult into winter plummage but still retained most of its distinctive breeding plummage. Thanks to all concerned for getting the info out. It was a unique opportunity to see a special bird in our area.
Posted by bob duckhouse at 09:21