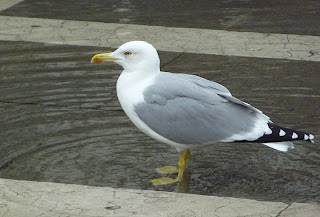 
Venice isn't noted for its bird life and so I didnt expect to see much in the way of bird life particularly as I had no optics with me. The old city of Venice is on an island, one of several on a salt water lagoon. The city's airport is on the mainland right next to the water so to get to Venice you have to take a water bus (13 Euros) across the water but passing mudbanks and uninhabited weedy areas. Birds observed on the 2 crossings were: Black headed Gulls, Yellow legged gulls, Grey Heron, Turnstone, Hooded Crow, Stonechat, Cormorant, Great crested Grebe, Starling and Marsh Harrier. Apart from Feral pigeons, Starlings and Gulls birds were few and far between in the city a few Blackbirds and House sparrows were the only other birds seen.
Posted by bob duckhouse at 07:52