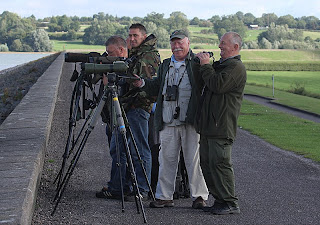 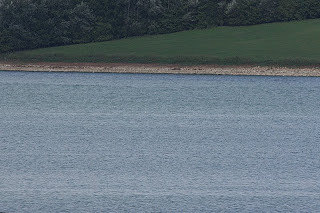 Spot the spot, see Dave Hutton's Blog site for images of the bird itself

Having spent a good deal of Monday driving up and down motorways I had plenty to do of a domestic nature today. However, the best laid plans were thrown into confusion when I got a barrage of texts (well 2) saying there was Red necked Phalarope at Draycote water. Despite further messages that the bird had flown and was being looked for I carried on and was relieved on arrival to see a small, but beautifully proportioned group of birders clearly focussed out on the water. A quick look through Terry Southgate's scope confirmed they were indeed looking at the Red necked Phalarope (166) It was distant, swimming backwards and fowards in continual motion. As we watched somebody picked out a couple of Black Terns and then John Judge who had left a few minutes earlier phoned up to say there was a Sandwich tern flying over the water. It was turning out to be quite an interesting few minutes.
In the late afternoon I found myself at Coleshill Quarry. There still wasnt much water but it was worth a quick look. A Greenshank was heard but not located and a Common Snipe was seen on the edge of a small pools. At Shustoke there was still several Common terns, a Common Sandpiper and a Kingfisher.
Posted by bob duckhouse at 09:44