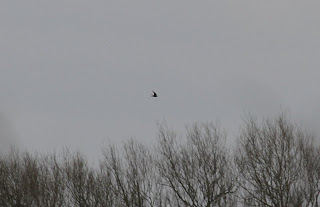 After a somewhat slow week around local haunts, in which my best bird was a Woodcock at Bentley, things livened up today. I was on the lookout for early migrants but drew a blank in the Merevale/Grendon Common area. Coton was also quiet with few birds on the water but I did pick up my first summer migrant of the year with a single Sand Martin which showed off and on for the 20 or so minutes I was there. I moved on to check the patches of rough ground around Hams Hall before going to Ladywalk but as a coach was disgorging its contents of eager birdwatchers and blocking the entrance anyway I decided to give it a miss. I was desperate for a coffee and a sandwich at this point so a quick trip to ASDA at Tamworth was called for. I say at this point, but it may well have been after a profitable trip to Lea Marston with a fine male Stonechat from the river bridge and Little Egret, Oystercatcher, 40 Wigeon and a Green Sandpiper from the Railway bridge. Anyway, despite the confusion of the order of sites visited I'm sure my final port of call was Fishers Mill. More Oystercatcher and a Redshank on the pool and a Brambling amongst a mixed flock of Yellowhammer, Linnet, Reed Bunting, Bullfinch, and Chaffinch in the hedges adjacent to the track. So no less than 4 new self found birds for the list, OK not exactly Mega species but still satisfying to find in Warwickshire.
Posted by bob duckhouse at 11:38