The Thursday Club on Tour 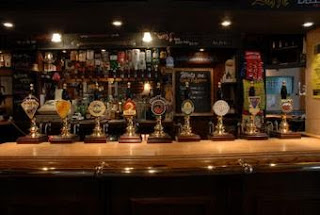 Impressive display of Ales on offer at The Merchant's Inn, Rugby 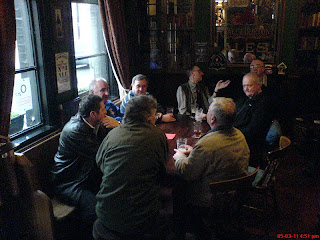 The Thursday Club at the Merchants Inn
Saturday 5th March 2011
The eight stalwarts of the Thursday gentleman's drinking Club, Church end Brewery Chapter met at the appointed hour on platform 5 of Nuneaton station. We tried to blend in with the normal comings and goings like characters in the station scene in 'The Great Escape'. We failed. Together with our CAMRA representative and guide, 'The Brigadier' aka Les, we boarded the 3.05 to Rugby.
With Les striding on ahead we made our way to our first stop, The Alexandra Arms for a very enjoyable pint of their own brew, the appropriately named Alex Ale - Petit Blonde. Our next stop was a quaint little pub called The Squirrel where I tried a pint of Cross Buttocks from the Jennings Brewery in Cumbria. Most of the group went for Dowbridge Porter from the more local Dowbridge Brewery. Having enjoyed the hospitality of a very welcoming host we moved on to the main event, a very interesting and civilised drinking house, the Merchant Inn with an impressive selection of Real Ales. I started with a pint of Lookout from the Hook Norton Brewery before moving on to the highly recommended Bishop's Farewell, from the Oakham Brewery. The conversation and wit never slowed and time passed quickly. It was soon time to move on again for the traditional curry before catching the train back. It had been an most successful outing and hopefully the Thursday Club will venture forth again to discover the delights of other Midlands towns in the future.
Posted by bob duckhouse at 02:11