A normal day in the Tame valley. 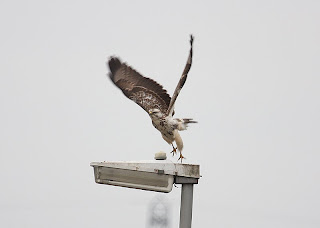 Monday 26th January 2009
After the exertions of yesterday it was necessary to potter about at a more sedate pace today. I scanned Coton but saw nothing particularly interesting, had a chat to the bailiff about the colour of the water in the river, pollution, Cormorants, sewage, over-population and moved on to Lea Marston balancing lakes where I was delighted to find a couple of Scaup, a 1st winter male and a female. There was also a single Ruddy duck.(109)
At Hams Hall apart from Bullfinch there seemed to be fewer birds around 'the bridge'. The two Firecrests had been seen earlier in the morning but there was no sign now. Two Chiffchaffs and two Grey Wagtails were there as well a couple of Green Woodpecker. A Raven was heard not far away and a white headed Common Buzzard made use of the lamposts in the station car park. A Green Sandpiper was viewable from the river bridge. Polly was calling so I went for quick one. At 70p a large cup you can't complain but I felt a bit conspicuous as everyone else was wearing high visability jackets- conspicuous being inconspicuous. Never mind.
I visited 21 Oaks on the way home to look for any finch flocks in the cover crops of maize but nothing doing.
Posted by bob duckhouse at 08:55