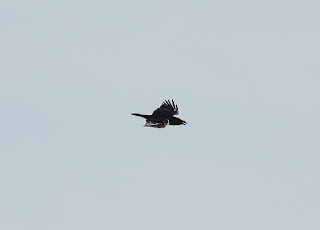 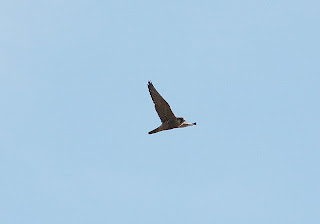 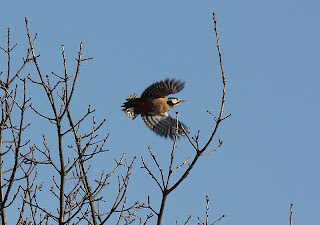 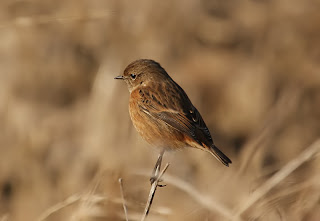 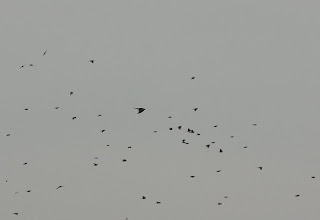 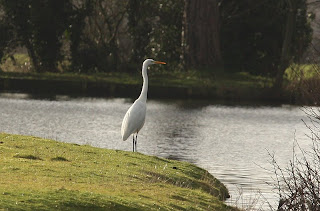 I couldn't resist another look at the Great White Egret even if it was in Leicestershire. Actually I have a great affection for Leicestershire having lived in the County during my indisciplined post College 'fun years'. A Pintail and 2 Kingfishers were also seen. Having gorged myself on the Egret A whim took me to Birchmoor via Warton. I dont know why I keep going to Warton but I did see a Little Owl there more than once and there used to be Corn Bunting in the area but not today.
Birchmoor though proved an inspired decision. Merlin, yes, terrifying a large flock of Skylark flew 360 degrees around me, wow. I also saw a Stonechat and a few Reed Buntings.
Kingsbury Water Park and the surrounding area is good value if you're prepared to put in the time. Broomey Croft car park had a Greater spotted Woodpecker briefly and another Kingfisher was on the canal. It was the area between the water park and Dosthill which produced some good birds today. Early afternoon saw a Peregrine falcon, 2 Raven, and Little Egret, later in the afternoon the 1st winter male Hen Harrier was seen as well as 2 Pink footed Geese which flew along the river from the water park to join the Canada goose flock at Dosthill Water Ski Centre. You said 3 falcons I hear you cry, sorry I forgot the Kestrels I saw frequenting the mound at Dosthill.
Footnote: I'm fairly convinced there are indeed 2 Hen Harriers in the Tame valley. Photographs can play tricks but there is clearly a 1st winter male, and I believe from shots I took today a female.
Posted by bob duckhouse at 11:40