Search for the Great White Egret 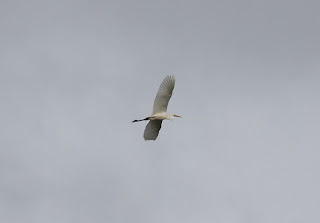 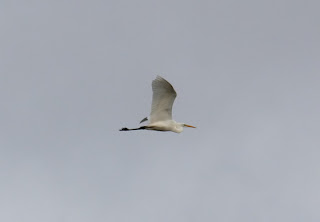 Sunday 25th January 2009
Tame valley birders were on high alert when the news emerged that a Great White Egret had been seen late on Saturday in the vicinity of Kingsbury Water Park. On Sunday with no further news I decided to check the Bodymoor heath pools and those at the southern end of the water park. No joy there but there had been a sighting of the bird heading towards Middleton so I headed that way, again nothing on the main lake but luckily I met Steve Cawthray who had a few ideas where the bird might be. To be continued when Ive had my tea.
O.K. Where was I. After checking the pool behind the farm and finding only Little Egrets we split up I headed back towards the Hall and Steve carried on to higher ground. It wasn't long before he rang to say he was watching the Great White in the pool I'd just left. I switched to twitch mode and accelerated to something between a brisk walking pace and Warp speed. I got back to the pool just in time to see a large white thing disappear over the trees. Steve, from his elevated viewpoint confirmed the bird had been spooked by a Grey Heron and flown to the field behind the canal. Dear me I sighed, but it was no time for self pity. By approaching the fields from behind the farm I would have an excellent view of the whole area. My trusty wellies served me well as I approached a point where I could see the whole field but no sign of the Egret. I turned to walk back but as I did so the Great White Egret erupted from the ditch beside me. The bird flew back over the pool towards Fishers Mill bridge. I phoned Steve but he was watching the bird flying over his head.
Posted by bob duckhouse at 10:31