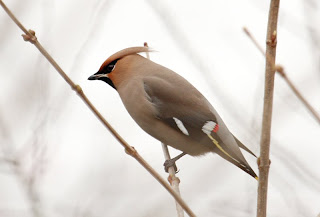 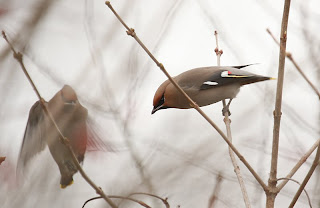 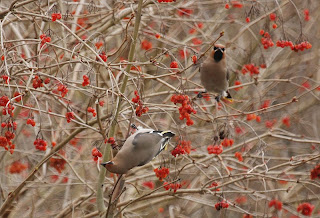 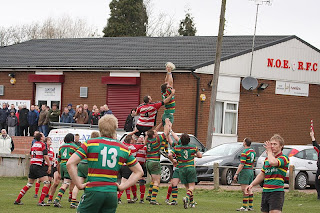 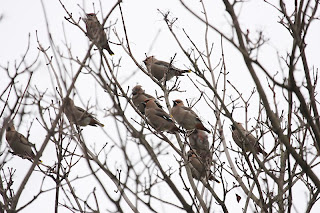 Saturday 7th February 2009
It had begun like many Saturdays in March, as a quiet birding day. Quiet in a birding sense as we wait for the arrival of the first migrants. But not quiet in a Julian Allan 'Whoops I've just dropped the window' in the hide at Coton sense. It actually didn't make any difference, the 2 female Scaup on the far side seemed obliveous to the Howitzer like explosion from the hide. Even the nearby Common Snipe were more alarmed by a couple of foraging Mute Swans than the seismic upheaval going on in the hide. No harm done then. Julian was in fact acting as Chaffeur to Tom for the day who in turn had offered to show his appreciation by buying Julian lunch which we all agreed was a dam fine thing to do. I decided to join them for a coffee at least, however, just as we arrived at the cafe at KWP Tom suggests I look at my pager. Would you Adam and Eve it. 4 Waxwings on my own doorstep in Nuneaton, the coffee would have to wait. On arriving on site there's no sign of the 4 Waxwings reported but more worryingly no sign of any trees or bushes which might encourage them to hang around. For nearly an hour I walk round the adjacent roads and avenues with no luck until walking further up the Weddington road I finally find not 4 but 15 Waxwings (120) in a large Willow tree next to the River Anker next to the Old Eds. Rugby ground (close to the site of the infamous Nuneaton Black bellied Dipper).
I phoned up a few local friends and put out an update on Rare Bird Alert. At last I'd caught up with Waxwings in Warwickshire.
And by the way The Old Eds won their match against Old Laurentians.
Posted by bob duckhouse at 11:52