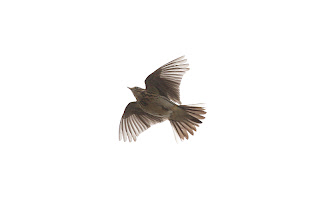 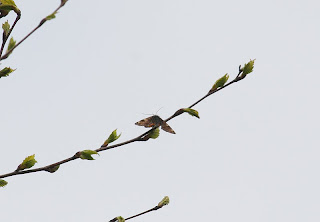 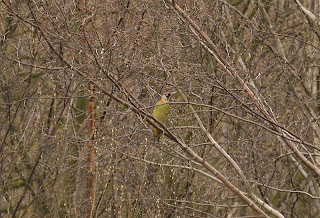 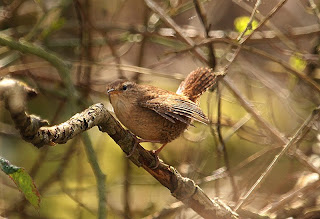 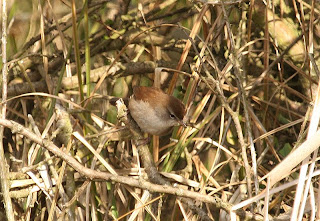 The images of the Cetti's and the Wren were taken at Brandon yesterday. Just as well I've included them 'cos there wasn't much doing today. Anyway about yesterday,I rather let myself down getting so excited about a Teal. The 'Blurred Birder' (very good West Mids Blog) was almost scathing, 'only a Common Teal, It'll be lumped, were all doomed '. Actually what ever you call it it was a cracking bird although it was difficult to see well yesterday as it stayed amongst the Willows, easier today apparently. Yesterdays photos showed the beautiful and subtle differences in the plummage of the Western Pal. and Nearctic versions.
Today started slowly and continued that way. The reason it started slowly was that I explored an area of reclaimed slag heaps that I'd not been to before not far from Kingsbury. Hang on, can I still say 'slag' I dont want to be politically incorrect. I'd better call them spoil heaps. Anyway bit of climbing but some great views and good migrant habitat, thought I'd at least get a Wheatear but had to content myself with Meadow pipits and Skylarks, displaying, Green Woodpeckers, Mistle Thrush, Common Snipe and Raven plus a new Moth for me an Orange Underwing in the Silver Birches.
After a coffee at the Lemon tree cafe, Kingsbury it was on to the Water Park. A quick look over the southern lakes produced nothing of interest. At Broomey Croft a pair of Swallows flew around the buildings and on Cliff pool apart from hoardes of Black headed Gulls were Little ringed Plover, Oystercatcher, Little Egret and Green Sandpiper. On the meadow a couple were blissfully unaware of the array of expensive optical aids which could have detected their every movement. I havent a clue what they were up to but they walked right round the edge of Cliff pool to do it. Flushing everything as they went! There was quite alot going on inside the hide too with notables Ron Thomas, Brian Kington and Steve Cawthray it was like the Brain's Trust the amount of local knowledge between them is remarkable.

I ended the day with a quick visit to Middleton and Fishers Mill. Quite a lot of RSPB activity at Fisher's Mill still so few birds except Gulls but the first Blackcap (128) of the spring was singing in the wood.
Posted by bob duckhouse at 11:38