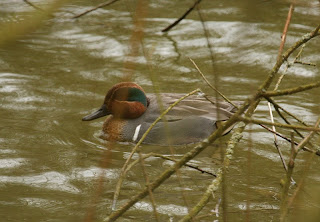 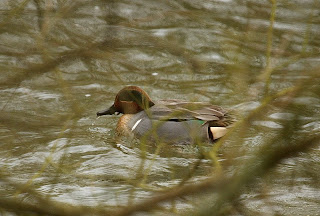 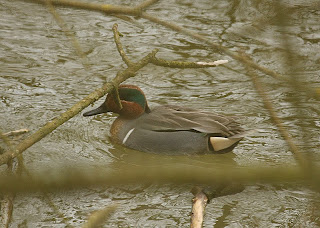 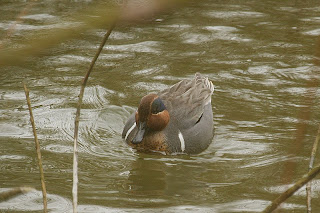 Monday 30th March 2009
The day started normally enough, didn't see the Lesser spotted Woodpecker at Brandon Marsh N.R. , nothing unusual there. Did see my first Little ringed Plover (126) of the year on East Marsh along with 2 Ringed Plovers, and got some decent views of a Cetti's warbler. A few Sand Martins and several Swallows passed through. A small group of Lesser Redpoll fed on the ground near the path overlooking Newlands and Treecreeper, Nuthatch, Jay, Wheatear, Great spotted and Green Woodpecker were also seen. I met up with Max who very kindly bought me a Coffee but that was when the fun began...I'd just taken my first sip and was pondering with Max how Paul Doherty got such fantastic footage of Owls when I happened to glance at my pager. Green winged Teal - Draycote Water. A serious Senior moment followed - my coffee was too hot so the nice lady put some cold milk in it, but I still had to drink it, time was slipping by. What a performance - Max was beginning to have doubts about my sanity. Apologies.
At Draycote I headed for Toft bay. There was no information on the pager about location but Toft seemed the logical place to start. Daisy May was already looking from the hide but it wasnt until he checked the banks near the new boardwalk that the bird was located amongst the willows. Although close in the Green winged Teal (127) was very elusive. It was only my second in Warwickshire.
Other species seen at Draycote : Sand Martin, Swallow, Wheatear, Meadow pipit, Red necked Grebe
Posted by bob duckhouse at 10:37