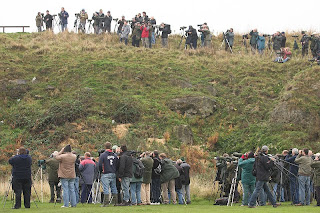 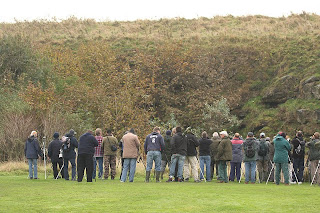 Friday 23rd October 2009
It had been a normal Thursday evening; a couple of pints of Vicar's ruin with the Thursday club at the Church End Brewery, a curry with Jan and the tail end of Coronation Street. I looked at the pager, something about an Eastern crowned warbler in County Durham. Despite the glass of wine with the curry I was aware enough to know that I needed to react. I was trained for this situation. I knew what to do. I phoned Tony Shepherd, he had also had a bit of a night out so a bit of sorting out had to be done. He rang back, I needed to pick Neil up and be at his place in the early hours. A few calculations old me I would be OK to drive by then.
When we got to the suggested parking area at South Shields it was deserted, which puzzled us, even though it was still dark we expected to see a few people around for a 'first for Britain'.
We tried to sleep in the car. Tony made some comment about the proximity of my feet to his head. I had clean socks on what was the problem and anyway I assured him he wouldnt smell them when my digestive system had got to work on last nights curry!
By the time the skies started to lighten there were about 30 or so birders around and we walked the short distance to the old quarry. Another 20 birders arrived from the opposite direction and we waiting for the light to come up. The bird had been seen in bushes at the base of a rocky edge. Time moved slowly as the expectant crowd tried to look for any movement amongst the leaves. Finally the bird was seen in the small Sycamore trees. As the light steadily improved the bird showed on and off always moving restlessly through the foliage. It was a question of being patient. I gave up trying to find the bird in the scope until I'd had a decent view in the bins but each time the bird appeared I got slightly better views. The light was now good and I tried with the scope again, at last a decent scope view - what a little cracker, I could relax now. Apologies to all those people I know who I had the briefest of words with but you know what it like on a twitch before you see the bird well.
The Eastern crowned warbler shared the bushes with a couple of Blackcaps and then a Yellow browed warbler flew, presumably in off the sea, over our heads and into the bushes. By the time we left there were approaching 300 birders at the site. A final memory worthy of note was the sight of Neil tripping over a guide dog in the car park. I'll say no more. A hearty breakfast at the nearby ASDA and then home with thanks to Neil and Tony for driving.
Posted by bob duckhouse at 01:19