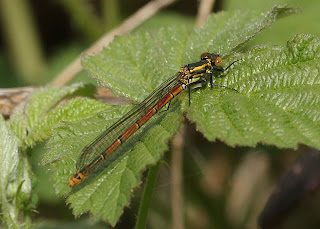 Large Red Damselfly, The canal, Kingsbury Water Park
Friday 7th May 2010
Cold north easterly blow but pleasant enough if you kept moving. Caldecote meadows still had at least 2 male and a female Northern Wheatear. Also 2 delightful Grey Partridge, a new bird at the site for me. It was also good to hear Skylark singing almost continually. Other birds included Green Woodpecker, Linnet, Cormorant, Grey Heron and Yellow Wagtail.
Kingsbury Water Park was quiet in an interesting birds sort of way, but noisy in a M42 and Black headed Gull sort of way. Only one Common Tern was seen. On Cliff pool there was a pair of Little ringed plover and a pair of Oystercatcher. At Fishers Mill the highlight was a low flying Peregrine falcon with prey. The unfortunate prey was a black bird about the size of a Blackbird so you can draw your own conclusions!
Returning along the canal a Hobby gave a typically brief appearance over 'Amys'. Also along the canal the first Damselflies of the year - Large Red Damselflies.
Posted by bob duckhouse at 09:16