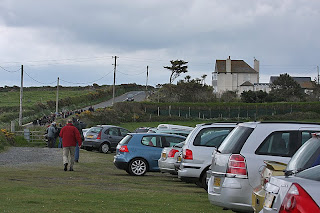 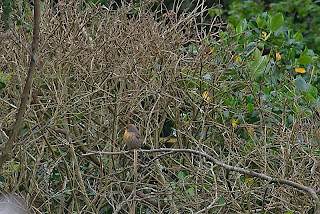 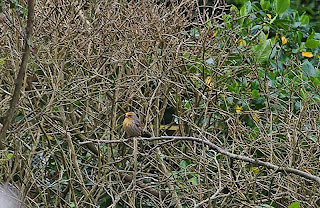 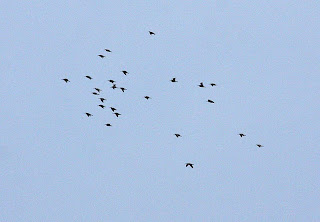 It started as a normal day in the life of a Warwickshire birder. A report of a Wood Sandpiper at Brandon Marsh meant I would make an early start there, treat myself to a breakfast and see what developed. I met Andy Hale and Dennis Woodward and watched a pair of Hobby perched in a dead tree tree from Teal pool hide. We went our separate ways but it was only seconds before Dennis rang me 'Have you seen your pager'? No but I'm up for a twitch! In a few minutes we were off to Cornwall via Dave Ludlow's house, who drove us down most of the way. We had a good run. There wasnt much info coming out on the pager but it appeared that a House Finch had taken up residence in a garden at Lands End. Showing intermittantly from the road not far from the Car Park. When we arrived we were told the bird had shown in trees in the garden about 15 minutes previously. It was a question of finding the best viewing point you could and waiting. A movement of people near the drive of the house suggested the bird was in view so we moved nearer the house. In fact a queuing system had been organised to allow people into the garden 6 at a time. After nearly 2 hours I reached the front of the queue.In fact the time had gone quite quickly as I lined up with Steve Whitehouse on one side and a women whose aim in life was see every living organism on the planet, on the other. My Warwickshire year list for birds seemed totally insignificant in comparison. I contributed very little to the conversation apart from the odd poignant observation and bringing everyone's attention to a Spotted Flycatcher which suddenly appeared. We were finally released into the garden and directed to the House Finch which luckily was showing well. I was regretting leaving my camera in the car, but on the other hand I was able to concentrate on the bird in the short time we were allowed. After such a long wait we had only what seemed a few seconds to enjoy the bird but with 150 birders now in the queue waiting patiently it was fair enough. Making our way back past the queue there were lots of faces I knew I'm sorry I didnt have more time to stop and chat but thoughts had turned to food and drink. Part 2 later.
After a cup of much needed coffee at the Hotel and a very brief sea watch during which we had a pair of Manx Shearwaters close in, we moved on to the Nanquidno valley to look for Chough. We didnt have alot of time for general birding and the weather was closing in. No Chough but Andy found a male Common Redstart and a flock of Whimbrel flew in off the sea.
Posted by bob duckhouse at 01:11