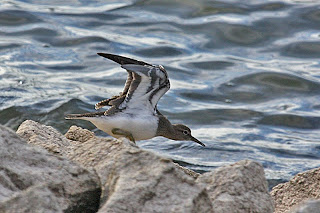 Late in the afternoon I got a pager message about a Sanderling at Draycote but no further details. Having been primed for action earlier I decided to give it a go even though the chances of it still being near the entrance were very slim. As I arrived the odds got slimmer as I greeted by the excited shouting of what sounded like hoards of children. They turned out to be a group canoeing in the small bay near the pontoons where the Sanderling had been. I had some walking to do to check as much of the shoreline as I could without walking all the way round. Apart from a single Yellow legged Gull on the boats and a Common Sandpiper I didnt see a great deal of interest but it was worth hanging around for a bit in case somebody picked up the Sabine's gull in the evening roost. The somebody being John Judge and Richard Mays. They did pick up an exceptional total of 20 Yellow legged Gulls but no Sabine's gull.
Posted by bob duckhouse at 01:20