A bit of Ruff 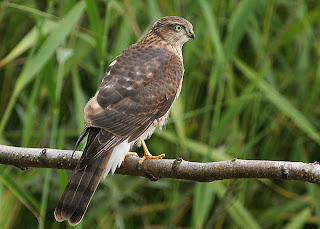 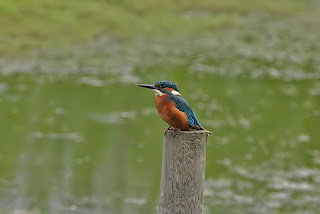 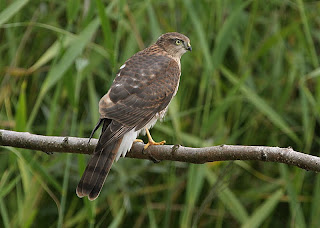 With the prospect of a full days Birding for a change a decision was needed - the Tame valley or Brandon Marsh with an option on Draycote Water if necessary. I opted for Brandon for no other reason than because I hadn't been there for a while. I was surprised that I had the place to myself as I wandered from hide to hide. At the Carlton Hide I had a bit of luck when a young Sparrowhawk landed on the 'Kingfisher pole' next to the hide. The Moorhen chicks disappeared but the single Green Sandpiper, a matter of a few metres away, froze and remained motionless for some time after the hawk had flown off. A Kingfisher did land on a post briefly sometime later. As I tried to take a couple of obligatory snaps the phone goes. Steve Cawthray had seen the Greenshank again between Fishers Mill and Middleton Hall. I still havent seen Greenshank in the County this year but I wasn't going to panic. Anyway I needed food so The Greenshank would have to wait. No Pork pies today though, a Morrison's Sandwich would have to suffice. There was no sign of the Greenshank at Fishers Mill when I did get there. I walked alongside the river with Geoff Williams after a good chat Geoff walked off in the direction of Staffordshire, while I stayed to focus on the Fishers Mill pools. As we went our separate ways we both heard the call of a Greenshank and 3 medium sized waders flew in and, after several attempts to land, dropped down not Greenshank though, Ruff (161).
Posted by bob duckhouse at 08:50