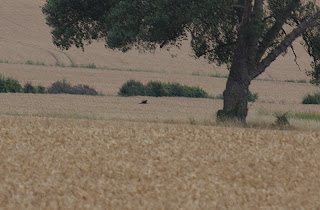 One of the problems of Blogging is that once its published its there in black and white for the whole world and TP to find fault with. Much of this Blog is a mixture of slightly tongue in cheek comment and fact based accounts. Picking out which is which is the hard bit - for some. I can take critisism, scepticism, sarcasm and ridicule (in small doses) but I draw the line at having my coordinates queried. I don't mean what the must have Birder is wearing this season. I mean in a geographical sense. If you've ever had your coordinates queried you'll know its not a very pleasant experience.
I feel at this point a word of explanation is called for. I stated in the previous post that the Marsh Harrier and Parakeet were seen at Orton on the Hill as originally reported which is in Leicestershire. When I got to the viewing point below the village, which was a stream on the Warks / Leics border the Harrier had moved across into Warks and the Parakeet flew from Warks over our heads into Leics. there, I hope that will satisfy anyone who is vaguely still interested at this point.
I spend a good deal of my life these days not knowing where the hell I am. That comes from Birding on the edge - the edge of Staffs., the edge of the West Mids., the edge of Leics. Most of North Warwickshire is within stringing distance of another County. One false step and life gets complicated.