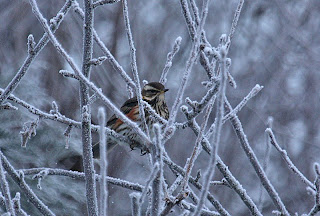 Four species of Thrush in the garden early this morning although none of them stayed long and the Mistle Thrush was a fly over. Garden birds have been few and far between despite the harsh weather but there has been a small flock of Long tailed tits and a few Goldfinch today as well as the regular Coal tits and Chaffinches and common garden species. I haven't seen a Wren or a Greenfinch in the garden for months. 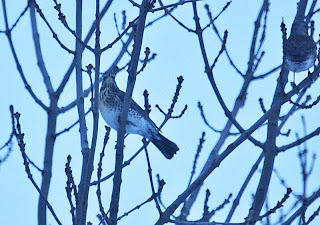 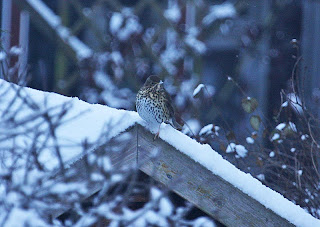 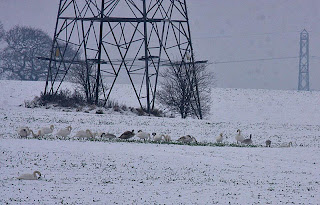 Wednesday 22nd December 2010 later:
Managed to get out for a short but quite eventful couple of hours in the afternoon. On the way up the A5 to Kingsbury a few Waxwings flew over the dual carriageway at Atherstone and landing in trees next to the Industrial estate. Further on I popped in to Grendon to find 2 Waxwings on 'my' Rowans but they didnt stay long due to the attentions of a very hostile Mistle Thrush. Near the junction of the A5 and the M42 the vast expanse of white towards Birchmoor was punctuated with black dots. There must have been several thousand Wood pigeon on the ground.
Arrived at Bodymoor Heath lane to find Graham Mant and Dave Hutton viewing the flock of swans at the back of the field, one with scope and one with camera. The Bewick's were quite distant and out of range for my camera. Dave and I drove back to Mancetter but there was no sign of any Waxwings in the area they were reported yesterday. However, I had to drive up the A5 again later and again a flock of over 20 Waxwing flew over the A5 into the industrial estate.
Posted by bob duckhouse at 09:51