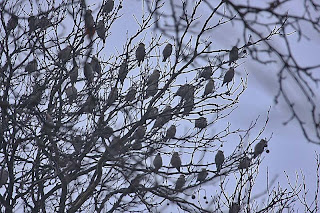 Waxwings, a small portion of the flock building up on Coventry road, Hinckley, Leics. 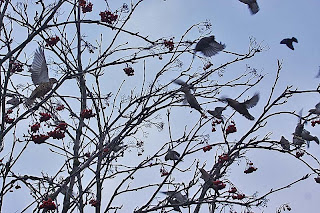 A Mistle Thrush desparately tries to resist the invading hoards of Waxwing.

Thursday 30th December 2010
Restricted to Garden birding for much of the day as I had to stay in for a delivery which didn't arrive till the afternoon. Did manage to get to Hinckley though to see the flock of Waxwings that is building up there. I counted 91 birds initially but there were considerably more than that by the time I left, maybe a couple of hundred. It was quite foggy and also raining so I sat in the car near the Rowans they were feeding on. When they came down it was chaos with a Mistle Thrush desperately trying to keep them away. The birds were also easily flushed by a steady stream of passers-by. At one point the birds were trying to grab berries virtually in flight and a hail of berries rained down on the car roof. I wouldn't mind but its had its annual wash already!
Posted by bob duckhouse at 08:56